Sparta was an ancient Greek polis that was surrounded by enemies, so Spartan citizens began preparing for war at birth. Spartan rulers examined newborn babies to determine if they were healthy and strong enough to be of value to the polis. The rulers killed sickly or malformed infants deemed incapable of contributing to the security of Sparta.

Spartans had to conform to strict rules. Spartan boys would leave their homes at age seven to begin training as warriors. The boys would live in a military housing called barracks where they faced rigorous training and discipline. Spartan trainers underfed the boys. If they caught a boy stealing food, the boy was beaten–not for stealing but for being caught. Spartan men could marry when they were twenty years old, but Sparta did not allow the men to live with their families until they reached thirty. A Spartan soldier who had not found a wife by age thirty would customarily capture an unmarried woman of his choice. Spartan men would continue to serve in the military until they were sixty years old. Both men and women in Sparta competed in athletic contests to keep physically fit.


Spartan men were constantly in training for war, so women completed many of the duties of running the polis. Woman were the sole owners of at least one-third of Spartan land. Spartan girls were raised to be tough so the women could bear strong children for the polis. The people of other poli would tell the story of a Spartan mother who killed her son for running away from his duties. Spartan women were known for being stoic. A stoic person can endure pain or hardship without showing their feelings or complaining. Bravery was the ultimate virtue for Spartan warriors. When soldiers went to battle, their mothers and wives would present the warriors with their shield and say: “With this, or upon this.” The soldier was expected to return to Sparta either victorious with his shield in hand, or be carried home dead upon his shield. If a Spartan soldier returned home alive and without his shield, the soldier faced banishment from the polis or death.

The Spartans were Dorians who invaded the land they occupied on the Peloponnesus, a peninsula in southern Greece. Spartan warriors expanded their territory by capturing neighboring lands. They called the people they captured helots. The Spartans forced helots to farm the land the helots once owned, but the helots had to provide half of their harvest to Sparta. A Spartan police force spied on the helots and killed anyone suspected of being a threat. Every year, Sparta would declare war on the helots and Spartan warriors would kill helots as part of their training.

Spartan laws discouraged anything that would distract citizens from their disciplined military life. Sparta did not welcome visitors from other cities, and did not allow their citizens to travel. The Spartans were not interested in other ways of life and did not want to bring new ideas to their polis. Today, we use spartan as an adjective to describe someone who leads a rigorously disciplined life that includes few comforts or luxuries.

Sparta’s army eventually came into conflict with Athens, a trading poli that developed the strongest navy of ancient Greece. In 431BCE, Sparta and Athens began a twenty-seven year long conflict called the Peloponnesian War. The Romans conquered Sparta in 146BCE, ending centuries of independence for the polis. In 1834, Greece began construction of a new city on the site of ancient Sparta. Modern Sparti is a small city with fewer than 20,000 inhabitants that lives on among the ruins of one of the most powerful cities in history. 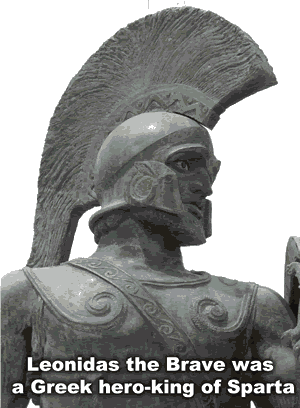 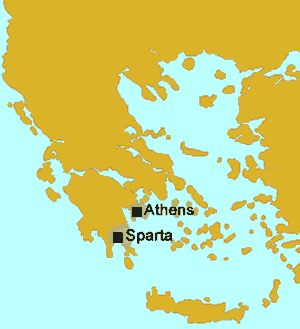