Italy is a peninsula that extends into the Mediterranean Sea east of the Greek peninsula. Rome lies on the western shore near the center of the peninsula. Today Rome is the capital of the modern nation of Italy and one of the largest cities in Europe, but Rome was once the seat of a huge empire.

In 509BCE, Rome was a small village. But as time went on–through force or persuasion—Rome controlled almost the entire Italian peninsula by 247BCE. In fact, by the second century of the Common Era, Rome developed into the greatest western empire of the ancient world. Many of our technological achievements, our ideas about law and government, and the words we use can be traced to the ancient Romans.

Rome grew from a village to an empire in part because the city was protected from enemy attack. Rome is situated along the banks of the Tiber River about fifteen miles inland from the sea. The Tiber has a ford or shallow portion near Rome. The ford made it impossible for large seagoing ships to attack the city, but experienced Roman sailors could navigate the Tiber’s waters in smaller ships. Seven hills surround Rome. The hills made it harder for invaders to reach the city and served as lookout areas for the ancient Romans. Rome is also close to excellent farmland and an abundance of wood and stone, so the Romans had the resources to supply a large army.

Archaeological evidence suggests that the banks of the Tiber River were first inhabited about 1500BCE, but the origins of Rome are steeped in myth and legend. Many ancient Romans believed twin boys named Romulus and Remus were responsible for the foundation of the city. The legends say a king feared the twins would rob him of his throne, so he tossed the infant boys into the frigid Tiber River. Soon after, a wolf rescued Romulus and Remus and nursed the brothers back to health. 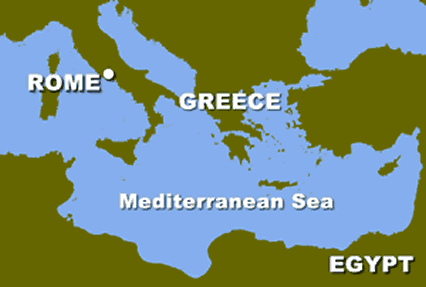 Romulus and Remus decided to establish a city on the Tiber River, but the brothers could not agree on a location. Signs from the heavens told each brother to establish separate cities, and on April 21, 753BCE, Romulus completed the wall around his city. Remus belittled the wall and its builders. When Remus climbed over the wall, the enraged Romulus killed his brother with an ax. Rome is named for Romulus, its legendary founder.

Rome grew from a small town in 509BCE to the ruler of most of the Italian peninsula by 247BCE. Throughout this era, Rome was constantly at war with one or more of its neighbors. At that time, when two cities went to war, the victorious army would destroy the conquered city and either kill or sell the citizens of the conquered city into slavery.


The Roman model of conquest was different. Rome expanded its territory in part because they extended many of the rights of citizenship to the people they conquered.

The Romans did not collect tribute from the people they conquered, but the Romans did require their neighbors to provide soldiers for the Roman army. As a result, the Romans had a massive source of manpower to draw upon for their many wars.

The Roman army built roads that often made the conquered cities more prosperous. The soldiers spread Roman customs to their home villages once their service ended. In time, the Latin language of the area around Rome was spoken throughout the Italian peninsula.

The Romans did not necessarily have the best army, but the immensity of the Roman military allowed the Romans to continue fighting despite tremendous losses. In 279BCE, King Pyrrhus of Epirus defeated the Roman army in two battles. Rome had a larger supply of soldiers, and while the Romans suffered greater casualties, the losses inflicted by the Romans destroyed Pyrrhus’ smaller army. Today we refer to a pyrrhic victory as an achievement with such disastrous results that it is actually a defeat. If your favorite team wins a game that clinches a berth in the playoffs – but loses two-star players to injury – that win could turn out to be a Pyrrhic victory.

Rome managed to unite most of the modern nation of Italy by 265BCE. Rome would next turn its attention to a rival in North Africa and go on to create a world empire.

Romans soldiers often told tales of ferocious soldiers from an earlier age. One popular story was the legend of Mucius. According to the tale, Rome was fighting an Etruscan king whose army surrounded Rome. To save the city, Mucius volunteered to sneak into enemy headquarters to kill the king. The Etruscans captured Mucius and brought him to their king. The king had a blazing urn and was prepared to torture Mucius to death. Mucius was not afraid. He declared, “I am a Roman citizen. My name is Gaius Mucius. I came here as an enemy to kill my enemy, and I am as ready to die as I am to kill. We Romans act bravely and, when misfortune strikes, we suffer bravely. Watch me and learn how insignificant the body is to those who dedicated themselves to a greater cause.”

Mucius then thrust his right hand into the flame. As the flames destroyed his flesh, Mucius told the king that there were 300 equally determined soldiers willing to accept any punishment to defend their city. The frightened king released Mucius and ended the war. We do not know if the stories are real or imagined, but they give us insight into how the Roman army thought.