The Gift of the Nile

Ancient Egypt: The Gift of the Nile

Like a giant snake, the Nile River slithers through some of the driest desert land on earth to create a narrow green valley. The ancient Greeks called this land Egypt. For more than five thousand years, famous and often mysterious civilizations thrived along the banks of the Nile. About 450BCE, a Greek historian named Herodotus called Egypt the “Gift of the Nile” because the Egyptian civilization depended on the resources of the great river.

Every spring, the snow on the mountains of East Africa melted, sending a torrent of water that overflowed the banks of the Nile and flooded the river valley.  The rushing river picked up bits of soil and plant life called silt.  As the annual flood receded, a strip of black topsoil emerged every year along the banks of the Nile.  The silt was rich in nutrients, and it provided the people of Egypt with two or three crops every year.

The Nile made it possible for the people of ancient Egypt to form the first nation in history. A nation may refer to a community of people who share a common language, culture, ethnic background or history. The land beyond the Nile River Valley is the Sahara Desert. A desert is land that receives less than ten inches of rain in a typical year. Since it is nearly impossible to grow much food in the desert, few people lived far from the banks of the Nile. Giant boulders blocked the Nile and formed a natural border at the southern Egyptian city of Aswan. The Nile flows into the vast Mediterranean Sea, which formed Egypt’s border to the north. Egypt’s isolation led to its unification. People living along the banks of the Nile River spoke the same language and worshipped many of the same gods more than five thousand years ago.

The Nile no longer overflows its banks because modern Egyptians built a huge dam in Aswan. Since 1970, the Aswan High Dam has held back the water that annually flooded the banks of the Nile River. The dam also provides a reliable flow of water for Egyptian farmers in the dry season. The people of Egypt are now able to convert the predictable flow of the Nile into electricity. The Aswan High Dam initially provided electricity to more than half of the villages along the Nile. The population of Egypt has grown since then, but the Aswan High Dam still contributes about fifteen percent of Egypt’s electricity. Unlike oil, the flowing water is renewable, which means that the river will not run out. Ancient and modern civilizations have relied on the mighty river, proving that Egypt truly is the “Gift of the Nile.”

The Nile River flows from the mountains of East Africa to the Mediterranean Sea. 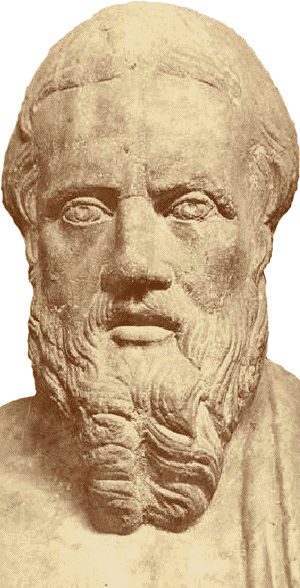 Herodotus (c. 484BCE–c. 425BCE), was is often referred to as “The Father of History.” Prior to the fifth century BCE, stories of the past were based on myths and legends, but Herodotus invented the systematic, thorough study of the past that attempted to explain the causes of events.