The Greek victories over the Persians in the fifth century before the Common Era led to an expansion of Greek culture we now call the Golden Age of Greece.” During this period of political stability, democracy flourished in Athens under a revered leader named Pericles. The Greeks also made advancements in art, drama, poetry and philosophy. The Golden Age ended with conflicts between Athens and Sparta that led to the 27-year long Peloponnesian War.

Athens was the founder of the Delian League, an alliance of Greek poli that defeated the Persians. Athens collected taxes from the other poli to maintain the military forces required to combat the Persians. The Athenians also used money from the Delian League to construct a colossal temple dedicated to the goddess Athena. In 447BCE, Athens began construction of the Parthenon at the top of the Acropolis (“high city”) of Athens. Resentment grew among many poli as Athens demonstrated its wealth at the same time the Athenians antagonized the rival city of Sparta.

Sparta called on the other Greek poli for assistance to quell a helot uprising. The helots were slaves forced to farm the land that fed the Spartans. Athens sent a force of 4000 soldiers, but the Spartans rejected the Athenian support. Thucydides later suggested that the Spartans feared the Athenians would switch sides once the Athenians were inside the Spartan city walls. The offended Athens ended their alliance with Sparta and at the end of the uprising, Athens assisted many of the escaped helots.

In 433BCE, Athens placed a ban on trade with a poli allied with Sparta. Athens’ high taxes of the other poli caused a weakening of the Delian League, so Sparta declared war to end the Athenian dominance of the Greek peninsula.

Sparta began a siege, or military blockade of Athens. Athens prepared for the siege by building long walls on either side of a four-mile road that connected Athens with a port. The Athenians resisted the siege for more than a year by receiving supplies at the port from their allies.

Pericles ordered the farmers living in the Athenian countryside to move inside the city walls for safety. The cramped and unsanitary living conditions inside Athens under siege were an easy target for disease. A plague, or contagious illness, spread through the overcrowded polis. The sickness killed more than 30,000 Athenians, about two-thirds of the population. Pericles, the leader of Athens during the Golden Age, was among the victims. The Spartans abandoned their blockade because the soldiers feared catching the disease.

Sparta and Athens agreed to a truce after a series of victories by the Athenian navy. The war had weakened both poli, but Persia, still bitter from their military losses to Athens, ended the brief period of peace. The Persians hoped to destroy the weakened Athens by contributing resources that allowed Sparta to create a powerful navy.

In 404BCE, the Spartans once again began a siege, but this time the Persian-sponsored Spartan fleet prevented ships from supplying Athens. Athens resisted the siege for almost a year, but without supplies from their allies, the starving Athenians were no longer capable of stopping the Spartan army from attacking.

The Peloponnesian War claimed thousands of lives and humbled both Athens and Sparta. A critic of the rulers of Athens named Socrates caused an uproar in the polis that eventually led to his execution. Conflicts continued among the Greek poli, who paid little attention to the growing military power of Macedonia, the mountainous land north of the Greek peninsula. Soon after the Peloponnesian War, Macedonia King Phillip conquered most of the Greek peninsula. His son, Alexander the Great, conquered the rest of the peninsula and went on to create the most powerful empire the world had known at that time.

The Peloponnesian War was a twenty-seven year long conflict between Sparta and Athens that ended the Golden Age of Greece. 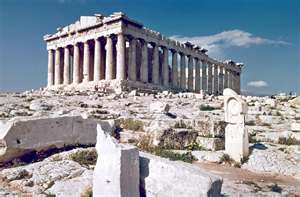 The Athenians constructed the Parthenon using funds from the Delian League. 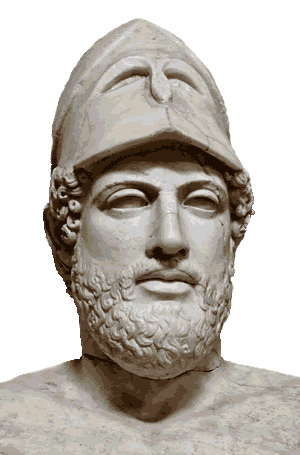 Pericles (495-429BCE) was the leader of Athens during the Golden Age of Greece. He died in the plague that occurred in 429BCE as Athens was under siege from Sparta.