The Middle Ages: Between Ancient and Modern

The Middle Ages: Between Ancient and Modern

In 476CE, warriors attacked the city of Rome and ended more than 800 years of glory for the “Eternal City.” Historians mark this event as the end of ancient history in Western Europe. About one thousand years later, Europe experienced a “rebirth” we now call the Renaissance. The era between the fall of Rome and the Renaissance is a thousand-year period we call the Middle Ages. Many historians use a Latin term – “medieval” – to describe the era.

The people of Western Europe who lived during the Middle Ages didn’t view themselves as in the middle of anything. They were more likely to regard themselves as living at the end of time because the great civilizations of Greece and Rome had fallen.

The beginning of the Middle Ages in Western Europe is often called the “Dark Age.” Life during this time was often difficult and short. It was an era of war, as barbarian armies overran land once controlled by Roman armies.

Terrible periods of famine, or great hunger, were common during the Middle Ages. Farmers knew that just one or two years of bad harvests could mean starvation for an entire family.

People had little understanding of hygiene, so the people frequently faced widespread disease. Children often died in infancy; a woman might give birth to ten children only to see two or three live past infancy. In the middle of the fourteenth century, a terrible disease called the Black Death killed nearly one-third of the people of Europe.

Life in Western Europe during the Middle Ages was very hard, and few people thought conditions could ever get better. Feudalism replaced the protection of the Roman army. Poor farmers often lived on land owned by noble families who were loyal to the ruler. Society was divided into strict social classes, and it was nearly impossible for a landless person to escape poverty.

The only hope for most people in Western Europe during the Middle Ages was their faithful belief in Christianity, and the hope that life in heaven would be better than life on earth. During the Middle Ages, builders demonstrated their faith through the construction of massive cathedrals. Soaring high above the simple dwellings of ordinary people, many cathedrals took more than a lifetime to complete.

Despite the significant challenges of the era, many of the seeds of our modern life were first planted during the Middle Ages. Many modern legal rights stem from a document called the Magna Carta written in 1215, when English nobles forced their king to accept limits on his powers. Formal education began as the first universities were organized in the eleventh century.

Though few people could read or write, some of the most beautifully crafted works of literature were composed. Beowulf, Geoffrey Chaucer’s Canterbury Tales, the poetry of Dante, and the legends of King Arthur are still read and admired today. The few books produced during the Middle Ages were called manuscripts, a term that means “written by hand,” because the printing press had not yet been invented.

The Dark Age was anything but dark in other parts of the world. Muslims in the Middle East studied and improved on the works of the ancient Greeks, while civilization flourished in sub-Saharan Africa, China, India, and the Americas.

Europe began to experience momentous change by about 1450, a period we now call the Renaissance. Renaissance is a term that means “rebirth.” Within one hundred years, Columbus had sailed to America, literacy spread after the invention of the printing press, scientists made great discoveries, and artists created work that still inspires us today. Historians regard the Renaissance is the beginning of modern history. 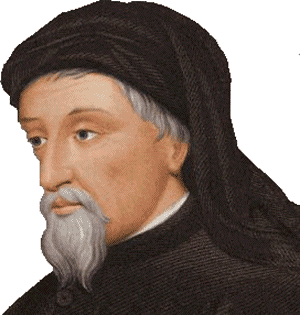 Geoffrey Chaucer (c. 1343 – 1400) is regarded as the Father of English literature. His best-known work is The Canterbury Tales (c. the 1380s), a collection of fictional anecdotes told by pilgrims traveling to the at Canterbury, in Kent, England. 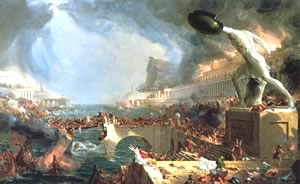 The Middle Ages: The Fall of Rome by Thomas Cole (1833 – 1336) is part of a series of five paintings he called The Course of Empire. 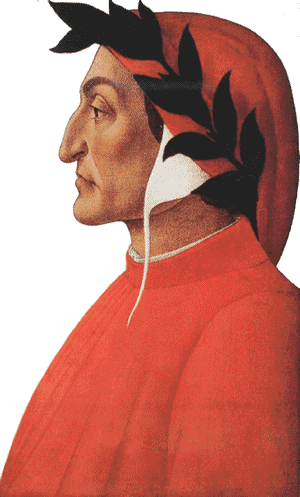 Dante Alighieri (c. 1265–1321), was an Italian poet whose Divine Comedy (1320) is considered the greatest literary works of the Middle Ages.