Charlemagne and the Holy Roman Empire

Charlemagne and the Holy Roman Empire

After the fall of the Roman Empire in Western Europe, Charlemagne built an empire that extended more than 800 miles from east to west. Though he ruled in an era many scholars describe as a “Dark Age,” Charlemagne made the capital of his vast kingdom a center of learning.

Charlemagne was a Frank. The Franks were a Germanic tribe that developed in present-day France. He was part of the Carolingian Dynasty begun by his father, Pepin the Short, and named for his grandfather, Charles Martel. A giant of a man, Charlemagne was six feet, four inches tall in an era when most men were little more than five feet tall.

Charlemagne inherited his predecessors’ talent for war. For many years after assuming the throne in 768, Charlemagne led his army on military campaigns throughout Western Europe, expanding the Frankish kingdom as he vanquished his foes. During his reign, Charlemagne doubled the size of Frankish territory to include present-day France, northern Spain, Germany, and Italy.

Charlemagne sought to unite all of the Germanic tribes into a single kingdom that was modeled after the Romans. The Frankish kingdom eventually included people of diverse cultures who spoke many languages, so Charlemagne appointed native members of the lands he conquered to administer the provinces in his name.

Charlemagne provided funds that allowed monks to copy the works of Greek and Roman authors. Couriers traveled throughout Europe to collect ancient manuscripts. Although Charlemagne was only barely able to read, he set up schools throughout his empire, and invited scholars from throughout Europe to establish a palace school in Aachen, the German city where he moved his capital.

In 800, Charlemagne traveled to Rome to celebrate Christmas with Pope Leo III. As Charlemagne rose from prayer, Leo placed a crown on Charlemagne’s head and proclaimed him “Augustus,” emperor of the “Holy Roman Empire.” The coronation united Christendom under Charlemagne’s rule, but it also troubled the newly crowned emperor. If the Pope had the power to proclaim Charlemagne as King, the Pope might also have the right to remove his power.

Charlemagne crowned his son, Louis, King of Aquitaine in 813. Charlemagne presided over the ceremony himself and did not invite the Pope. Many years later, as Napoleon was about to be crowned Emperor of France in 1804, he took the crown from Pope Pius VII and set it on his head himself.

The empire Charlemagne created crumbled soon after his death and the promise of returning the glory of Rome to Western Europe soon faded. The term Holy Roman Empire described various Frankish and German lands for another ten centuries, but the empire never again attained Charlemagne’s promise of uniting Christendom into one kingdom.

Francis II, who ruled until the early nineteenth century, was the last monarch to call himself the Holy Roman Emperor. But after a defeat by Napoleon’s army, Francis renounced his title and decreed himself emperor of Austria. 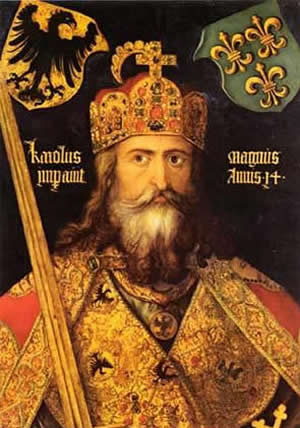 Charlemagne (c. 747 – 814), also known as Charles the Great, was the King of the Franks from 768, and from 800 the first emperor in western Europe since the collapse of the Western Roman Empire. ”

Before the invention of the printing press, books were manuscripts, that is, a Latin term that means written by hand. Early manuscripts had no standards. There was little punctuation, and scribes often made their litters quite differently from one another. Copying entire manuscripts was difficult and time-consuming, and the animal hides used before the invention of modern paper were expensive. Scribes often used abbreviations and allowed words to run together to speed up the process and to save space.

Charlemagne has a deep interest in learning, and he wanted to make reading more accessible. So he encouraged a calligraphic standard called Carolingian miniscule to be used throughout his kingdom.

Scribes trained in Carolingian miniscule made letters that were clearly distinguishable, they placed spaces between words and used more punctuation. They wrote titles in capital letters to make it easier for a reader to scan the manuscript.

Charlemagne’s scholars copied many Roman texts in the new handwriting. Today, over 7000 manuscripts written by Charlemagne’s standard are available for modern scholars to study. 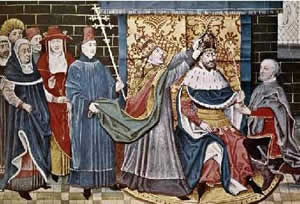 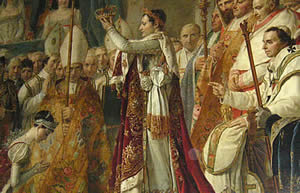 In 1804, Napoleon was about to be crowned Emperor of the French. At the moment of his crowning, Napoleon unexpectedly took the crown from Pope Pius VII and crowned himself.