Home » Middle Ages » The Vikings
Previous
Next
The Vikings

On a day in June, 793, the monks at Lindisfarne Abbey were working and praying. Lindisfarne was a monastery off the coast of northeast England that had become a center of learning and a storehouse of great wealth. It was famous for the Lindisfarne Gospels, a handwritten version of the first four books of the New Testament of the Christian Bible copied into English. Lindisfarne was a peaceful place, becoming an island twice each day at high tide, as water surrounded it.. So the raiding party of seamen that suddenly appeared must have been a shocking sight to the monks.

The attackers massacred monks and priests and slaughtered livestock. In search of treasure, they destroyed sacred Christian relics—particularly small and easily portable objects of gold and silver. To the invaders, Lindisfarne was a large treasure house ripe for plunder—with its population of men who lacked the skill to defend it.

The sack of Lindisfarne was the first major episode of two centuries of warfare that we now call the Viking Age. The Vikings were Norsemen, or “people from the north.” They came from Scandinavia, land that includes the present-day nations of Norway, Sweden, and Denmark in northern Europe. The cold climate of Scandinavia allowed for a short growing season. So as the population became too large to feed, some Scandinavian warriors turned to the sea to find their fortune. They used their seafaring abilities to plunder and terrorize people of the Middle Ages throughout Europe and as far away as Egypt.

Viking ships were narrow and built of thin overlapping oak planks. They could bend and flex to absorb the impact of waves without breaking apart. A depth of three feet of water was all most Viking ships—even those carrying as many as fifty men—needed to move through the water.

Viking ship could travel at a fast clip with sails, or it could glide stealthily through the seas propelled by teams of strong rowers. The ships also were light enough to be carried overland by men when rivers became impassible. Vikings almost always had the element of surprise on their side, as their ships could seem to appear from nowhere.

For the next 250 years, Viking warriors plagued England and the coast of continental Europe. King Alfred the Great of England made peace by surrendering a portion of Britain to the Vikings. This land became known as the Danelaw—the part of Britain where the laws of the Danes (Vikings) were in effect. The Viking-controlled English city of York became a center of trade.

The Vikings explored the lands both east and west of their homeland. The Rus’ were ferocious fighters who controlled a swatch of eastern Europe from the North Sea to the Black Sea. Rus’ folklore tells of a time when they emerged “from over sea.” There is some dispute, but many scholars believe Rus’ is derived from an Old Norse term that means “men who row.” Present day Russia takes it name from the Rus’.

Other Vikings sailed west and discovered Iceland. About 980, Erik the Red sailed farther west with about 300 settlers to begin a settlement on ice-covered land he called Greenland. The Vikings remained for more four hundred years until the climate of Greenland turned colder. The land could no longer produce food, so the Vikings abandoned their settlements and returned home.

Viking legends indicate that Erik’s son, Leif Eriksson, sailed west to reach North America. The Vikings called their North American settlement Vinland, or “land of the grapes.” Archeological evidence from a site in Newfoundland, Canada known as L’Anse aux Meadows clearly indicates a Scandinavian settlement. The Vikings abandoned Vinland after about 35 years. Many historians suggest that Christopher Columbus heard the legends of the Vikings and knew of the possibility of a “New World” when he set sail to find Asia in 1492.

Some Vikings continued to enrich themselves by demanding that communities they threatened pay a bribe to be spared an attack. The English and the Franks raised taxes called the Danegeld (Dane Gold) to pay tribute to the Viking raiders to save their land from being ravaged.

In time, Vikings transformed from fierce marauders who traveled by water to plunder, loot, and pillage, to people in settled communities who turned their attention to domestic pursuits such as farming. As time passed, various Viking groups gave up their polytheistic religion and adopted Christianity. One group of Vikings settled in northwest France. In 1066, the Normans invasion of England became a turning point in European history. 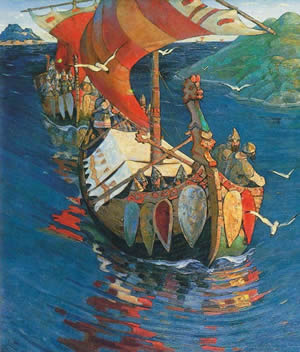 Viking ships were generally characterized as being slender and flexible boats with overlapping of planks riveted together. 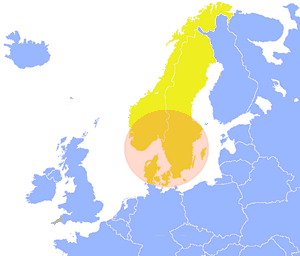 The Vikings were from Scandinavia in northern Europe. The present-day Scandinavian nations of Norway, Sweden, and Denmark and shown in yellow.  Most Vikings came from the southern portion of the region shown in pink.

The Vikings were ferocious, but they were also particular about their personal hygiene. Several excavated Viking graves have yielded tweezers, razors, combs made from antlers and animal bones. Vikings warriors also used spoons for cleaning the wax out of their ears. An English writer was amazed that the Vikings combed their hair daily, bathed weekly, and changed their clothing on a regular basis.

Untrimmed nails provoked particular revulsion among the Vikings. Loki was a fierce Norse god fabled to have sailed on a ship constructed of the untrimmed fingernails and toenails of dead men. 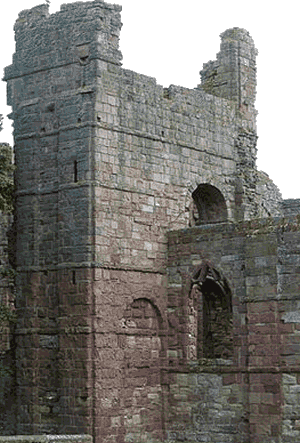 The Lindisfarne Abbey was established by the Irish St. Aidan sometime around 635. It had become a center of learning and a repository of great wealth—both in terms of the monetary value of the objects it held, and in religious terms. Lindisfarne was also the resting place of St. Cuthbert, who had once been the bishop of Lindisfarne.