The Byzantine Empire and the Crusades

By 285, the Roman Empire had become too big for one ruler to manage. Conflicts among the many cultures of the empire developed into several wars, so Emperor Diocletian appointed a sub-emperor, called a Caesar, to rule the western half of the empire.

Diocletian ruled the eastern half, an indication that the East was the richer, more stable portion of the empire. While the West was prone to frequent attacks from barbarian tribes and relied heavily on agriculture, the Eastern Empire was more secure and had a varied economy.

In 330, Constantine moved his capital from Rome to the Greek city of Byzantium. He named the city Constantinople, which means “Constantine’s city.” Constantine wanted his capital to be safe from barbarian invasion, so he chose a location at the end of a high peninsula that is surrounded by water on three sides.

Constantinople was located on the Bosporus Strait, a narrow waterway that connects the Black Sea to the Mediterranean Sea. This location made the city a center of trade, and people from faraway lands traveled to Constantinople to conduct business, making it one of the most world’s most important cities.

The emperors who followed Constantine considered themselves to be Roman. Modern scholars describe the eastern empire as the Byzantine Empire particularly after the fall of Rome in 476. Byzantine refers to the original name of Constantine’s capital, Byzantium.

In 800, Pope Leo I crowned Charlemagne Holy Roman Emperor. Byzantine leaders considered Charlemagne’s coronation an insult; they considered themselves to be the rulers of both Christendom and the Roman Empire. The disagreements between east and west continued for centuries leading to a schism, or separation of the church. After 1054, many Eastern Orthodox Churches no longer acknowledged the Pope, while the Western Roman Catholic Church accepted the Pope as the leader of their faith.

The Byzantine Empire began to look less like the Roman Empire as the years passed. The empire covered present-day Greece, the Balkans, Asia Minor, Syria, and Egypt. By the seventh century, Greek had completely replaced Latin as the language of the Empire.

In the middle of the 11th century, the borders of the Byzantine Empire began to be overrun by Turks. The Turks had recently converted to Islam, and the Byzantine emperor feared the Muslims would soon overpower his Christian empire. The emperor asked the Pope— the leader of the Western Christian church—to assist in a holy war against the Turks.

In 1095, Pope Urban II launched the first of many Crusades, or “wars of the cross.” Urban hoped that in addition to expelling the Turks from the Byzantine Empire, he would also be able to reclaim the holy city of Jerusalem from Muslim control. Soldiers from throughout Western Europe left their homes to free the Byzantine Empire of the “unbelievers.” Their exposure to new and different cultures was a factor that would eventually lead to the Renaissance hundreds of year later.

Christian warriors captured Jerusalem in 1099, but a Kurdish warrior named Saladin reclaimed the land for Islam in 1187. Crusaders continued for fight nearly two hundred years, and ultimately the Christian warriors were unsuccessful.

The Turkish Ottoman Empire eventually conquered most Byzantine land. Constantinople fell to the Turks in 1453. The Turks called the city Istanbul, a word that means “the marketplace,” but the Turkish government did not make the change official until 1930. Turkish has replaced Greek as the language of Asia Minor, and today, more than 99% of the people in modern Turkey are Muslims. 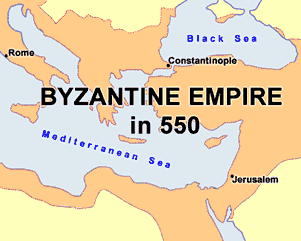 The Byzantine was the continuation of the Roman Empire in the East until 1453, when it fell to Turkish warriors. 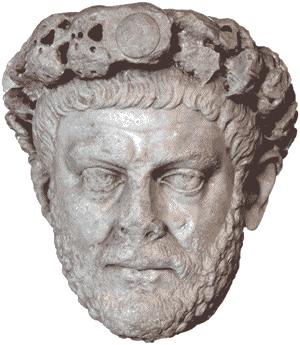 Diocletian was Emperor of Rome from 284 to 305CE. In 285, he appointed a Caesar to rule the western half of the empire. 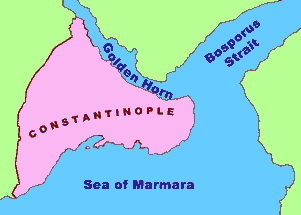 Constantinople is located on a well defended peninsula. The Bosporus Strait leads to the Black Sea, while the Sea of Marmara leads to the Mediterranean Sea. 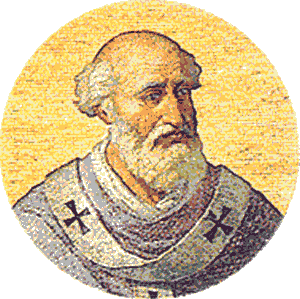 In 1095, Pope Urban II launched the first of many Crusades, or “wars of the cross.” 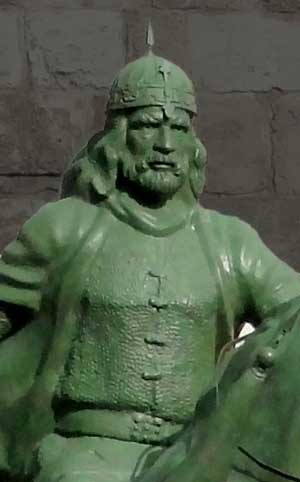 Saladin (1137 – 1193) was a Kurdish warrior who led the Muslim military campaign against the Crusader states. A bronze statue in Damascus was unveiled to commemorate the 800th anniversary of his death.