The Magna Carta is the most famous document in English history. It has served as the basis of English law for centuries and provided an inspiration for the American justice system. The Magna Carta defined England as a nation of laws; that the king must follow the same set of rules as everyone else.

In 1215, King John of England wanted to go to war, but the disliked monarch needed the support of his nobles. In his sixteen years on the throne, John raised taxes and seized the land of nobles to fight wars. During John’s reign, the king of France captured most of the English lands in Normandy. Normandy is the land in northwest France that was the home of William the Conqueror.

King John’s unpopularity also involved in a quarrel with the Pope. Centuries later, England would split from the Church under Henry VIII, but in John’s era, the leader of the Church could be a powerful enemy. In 1208, the Pope excommunicated or expelled John from the church. For five years, the Pope Innocent III refused to bless England. In 1213, the king settled his dispute with the Pope by agreeing to an annual payment to the Church. So John had to again raise taxes.

The nobles refused to support John unless he agreed to their demands. Negations between the nobles and the king were held in a meadow at Runnymede instead of a castle. The meadow provided the barons with an advantage if the gathering turned violent. Their agreement would come to be known as the Magna Carta, a Latin term that means Great Charter.

The nobles forced the king to agree that he could not take property without compensation or consent. The Magna Carta did little to address the needs of the peasant class of England who composed about 90% of the population, but did not own land.

Many of the sixty-three clauses of the Magna Carta were relevant only in the thirteenth century, but other parts of the Great Charter are echoed in later documents. The Magna Carta decreed that no person was too powerful to follow laws. Justice of the courts had to apply to everyone; that punishments should be appropriate to for a crime, and that no person could be deprived of life, liberty, or property without due process of law.

Two months after King John signed the Magna Carta, he convinced the Pope to declare the charter to be illegal. The Magna Carta might have been forgotten if John did not die the following year. John’s heir was his nine-year-old son, Henry. The new king was too young to rule, so the nobles selected William Marshall as regent. A regent is someone who rules temporarily until a monarch reaches adulthood.

Marshall reissued the Magna Carta, this time in the name of the young king. By the fourteenth century, the Great Charter was read aloud twice yearly in county courts and cathedrals. Later kings added rights to the Magna Carta when they needed to raise taxes.

The idea of natural law, law that could not be altered by either a king or a legislature appealed to the leaders of the American Revolution. In the eighteenth century, the Americans enshrined many of the ideals of the Magna Carta in the Constitution of the newly formed United States. 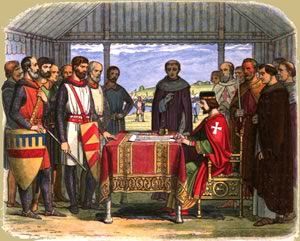 King John I of England signs the Magna Carta in 1215. 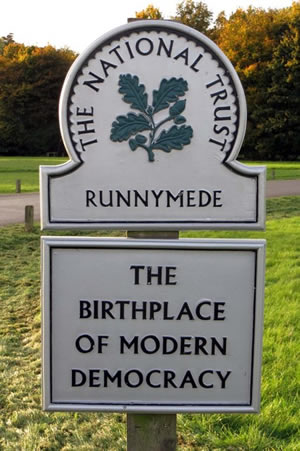 The site where the Magna Carta was signed is now a tourist attraction.