Beyond the northwest border of the Roman province of Gaul in present-day France, the long haired kings of the Franks began uniting under the rule of Marovich. Most people in western Europe spoke Celtic languages at that time, but the Franks spoke a Germanic language because as they migrated from the east. The Merovingian rulers were known as the long haired kings because they believed their authority came from their uncut hair.

In 481CE, a fifteen-year-old warrior named Clovis killed off his rivals to create a fearsome Frankish kingdom. Five years later, the young king defeated the Roman army and moved his capital to Paris. By his death in 511, Clovis controlled all but a small portion of the former Roman province of Gaul.

Christianity had become the official religion of the Roman Empire in 380; the faith grew even in remote Roman provinces of such as Gaul. The Franks, however, were pagans who continued to believe in many gods. They worshipped Clovis as the descendent of Wotan, the Frankish god of the sky though Clovis did marry a Burgundian woman who was raised as a Christian. When their first child died at birth, Clovis blamed his wife’s faith in Christianity. But facing a defeat by a rival army in 496, the Frankish king was inspired by his wife’s faith, so he made a promise to his wife’s Christian God.

Clovis vowed to devote his life to Christianity if the Franks won a decisive battle against the Alemanni. The next day, the Alemanni king was killed and his soldiers surrendered. As a result of their unlikely victory, a Christian bishop baptized Clovis. Soon after, 3000 Frankish soldiers joined Clovis in the faith. Charles de Gaulle, a twentieth century French ruler wrote, “The history of France begins with Clovis…the first king to have been baptized a Christian.”

When Clovis died, his kingdom was divided among his four sons. The power of the Frankish kings grew weaker over time as they granted land and power to noble families who fought for the Franks.

Charles Martel’s army faced Jabal Tariq, whose Muslim army had conquered Spain twenty years earlier and had crossed the Pyrenees Mountains into Frankish territory. Martel’s victory repelled the Muslim army and ensured that Christianity would be the religion of Europe.

In 751, Charles Martel’s son, Pepin the Short, made an alliance with Pope Zacharias, who granted Pepin the title “King of the Franks” and ousting King Childeric.

Defeated and ashamed, Childeric exiled himself to a monastery. As was the custom of the time, he was tonsured—hair was removed from the top of his scalp—upon entering the monastery. Childeric’s tonsure meant that the rule of the long haired Merovingian kings had ended. The new kings were to be of the Carolingian dynasty, the descendants of Charles Martel. 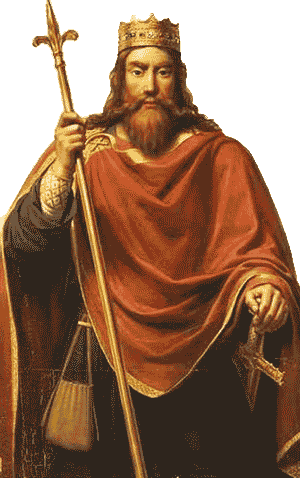 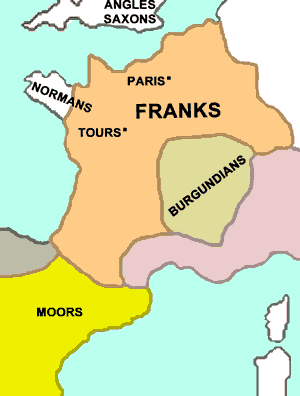 By the beginning of the seventh century, Clovis had conquered most of the former Roman province of Gaul. 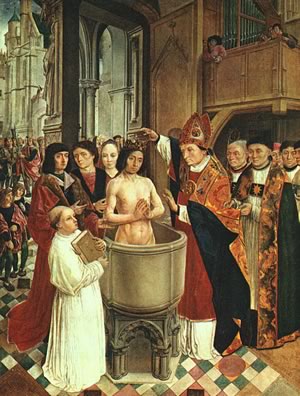