Latin and Other European Languages

Latin and Other European Languages

Latin was the language of the Roman Empire. First spoken only in and near the city of Rome, Latin became the official language of business and government as the Roman Empire spread to most of Europe. Few people speak Latin as their primary language today, though Latin survives in several Romance languages.

Classical Latin was the language of literature and the language spoken in the Senate; the common people and Roman soldiers generally spoke a variant the language known as Vulgar Latin.

The power of the Roman Empire faded at about the same time Christianity spread through Europe. Roman provinces began to assert their authority beginning in the fifth century of the Common Era, but Latin remained the language of the church for centuries. Today, Latin is the language of the Roman Catholic Church and the official language of the Vatican city-state. Many students throughout the world continue to study Latin as Latin vocabulary is still widely used in law, medicine and philosophy.  E pluribus unum (“out of many, one”) is a Latin phrase found on most American currency. 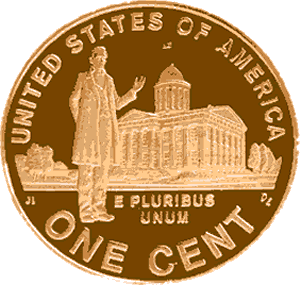 Germanic languages are spoken primarily in northern Europe, including the Netherlands, Sweden, Denmark, Germany and the United Kingdom.

Modern English evolved from Germanic-speaking tribes who settled in Great Britain in the tenth and eleventh centuries. Scholars believe that English as spoken in 1000CE would sound similar to the Frisian languages spoken in the Netherlands and Denmark today. The Germanic speakers displaced Latin and many Celtic languages that were spoken at that time in Great Britain.

About 400,000 people in Wales speak Welsh, one of the few Celtic languages that is neither extinct nor classified as “endangered” by UNESCO. Celtic languages were prominent before the expansion of the Roman Empire. Despite the scarcity of speakers, the influence of the Celtic people lives on in stories and myths. Leprechauns, Halloween and the Blarney Stone are remnants of Celtic culture. Irish students are often encouraged to study their traditional Celtic language, but most Irish people speak English in everyday conversation. 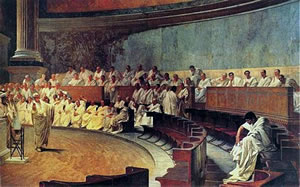 Roman senators, and poets spoke Classical Latin, but most common people spoke a variant of the language called Vulgar Latin. 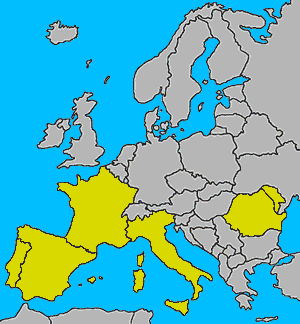 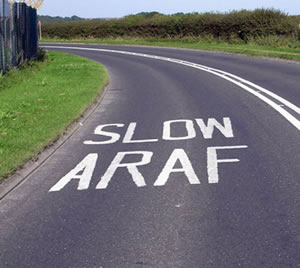 A road sign in Wales written in English and in Welch.