Rome fought three wars with Carthage between 264 and 146509BCE. The wars established Rome as a world power and left Carthage, once a powerful empire, in ruins.

Carthage was a city in North Africa originally founded as a trading post by the Phoenicians. Since historians have tended to label the conflicts by the Roman name, we know them as the Punic Wars. Punica was a Latin word for Phoenician.

By the time of the first Punic War, Carthage had created an empire that stretched across North Africa and into the southern coast of modern day Spain. Merchant sailors from Carthage traded with cities throughout the Mediterranean Sea. To protect its profitable sea trade, Carthage developed a powerful navy.

Meanwhile, the Romans had completed their conquest of the Italian peninsula by 263BCE. Because Rome’s economy depended on the plunder of their army, the Roman Senate had to keep the army busy. Otherwise, an idle army might have turned against the Senate. So the Senate turned their sights on Carthage.

Rome and Carthage fought the first Punic War over Sicily, a Mediterranean island off the coast of the Italian peninsula. Carthage controlled Sicily in 264BCE, so the Romans found an excuse to declare war. Carthage had imprisoned a small group of Roman fortune seekers, so the Romans went to war in retaliation for their capture.

Rome had a powerful army, but their new foe was overseas, where they had little experience. They lacked the naval skill to sink ships, so they found a way to fight a land war at sea. Roman sailors used pulleys to lower the bridge to face an enemy ship. The Roman ship would ram into an enemy vessel. The spike attached the two ships and allowed soldiers to cross over and attack in hand-to-hand combat—where Rome was more experienced than Carthage.

To try to close the gap in naval power, the Romans captured a Carthaginian warship and used it as a model to build their fleet. They won a few early victories and captured most of Sicily, but the inexperience of the Roman navy left them unprepared for a catastrophic storm that destroyed two-thirds of their fleet and killed thousands of Roman sailors. Rome raised a second and third fleet, but storms also destroyed most of the additional ships.

A Carthaginian general named Hamilcar Barca recaptured most of Sicily, but Carthage did not have the money or manpower to continue to engage in the conflict. In 241BCE, an exhausted Carthage surrendered Sicily to the Romans.

A generation after the first Punic War in 218BCE, a young Carthaginian general named Hannibal, the son of Hamilcar Barca, sought revenge from his base in Spain. He led an army of 40,000 soldiers, 8,000 horses and 37 war elephants in a daring and difficult journey over the Alps, a treacherous mountain range that stood between Spain and the Italian peninsula.

Hannibal’s army won three decisive victories against Rome in northern Italy despite being outnumbered more than two to one. In the Battle of Canae, Hannibal’s army surrounded the Romans, killing between 50,000 to 80,000 Roman soldiers.

As a result of their humiliation at Canae, Rome changed their strategy. They sent a new army to northern Italy with instructions to withdraw. Hannibal spent the next twelve years destroying the Roman countryside, but his army had no opponent to fight.

After years of bloody warfare in Italy, the Roman consul Scipio proposed a daring invasion of Carthage in 203BCE. The Senate reluctantly agreed, and Scipio arrived in North Africa with an army of 7000 men, most of whom were volunteers. Scipio added to his forces when he encountered soldiers in Carthage willing to switch sides.

Hannibal was called home to face Scipio, but he had to leave his own loyal army behind in Italy. Without Hannibal in charge, the war on the Italian peninsula turned in Rome’s favor.

Back in Carthage, Hannibal was given a mercenary army in place of his devoted soldiers. Mercenaries are foreign soldiers hired to fight. Hannibal was used to his loyal troops, and his new mercenary command was no match for Scipio’s army. Rome defeated them and won the Second Punic War.

Though Carthage had been defeated, the antipathy or bad feeling caused by Hannibal’s destruction would last for generations and would lead to the third Punic War and the downfall of Carthage.

Carthage was no longer in a position to hurt Rome after the second Punic War, but in 149BCE, Roman antipathy toward Carthage continued to linger. A Roman senator named Cato ended every speech with the cry, “Carthage must be destroyed.”

Rome attacked Carthage and the two sides fought bloody battles in a war that lasted almost three years. After a siege in 146BCE, the Romans broke through the city walls of Carthage. Once they subdued the Carthaginian army, Roman soldiers went from house to house slaughtering the people in their homes. After destroying Carthage, the Romans sold the remaining citizens into slavery, burned the city and destroyed Carthage’s harbor.

Rome annexed Carthage by making the city a part of a Roman province they called Africa. Africa probably comes from a Latin word that means “sunny land without cold.” The Punic Wars established Rome as a powerful nation and the wars were an indication that Rome would develop into one of the most powerful empires in history.

View a Powerpoint presentation of this lesson. 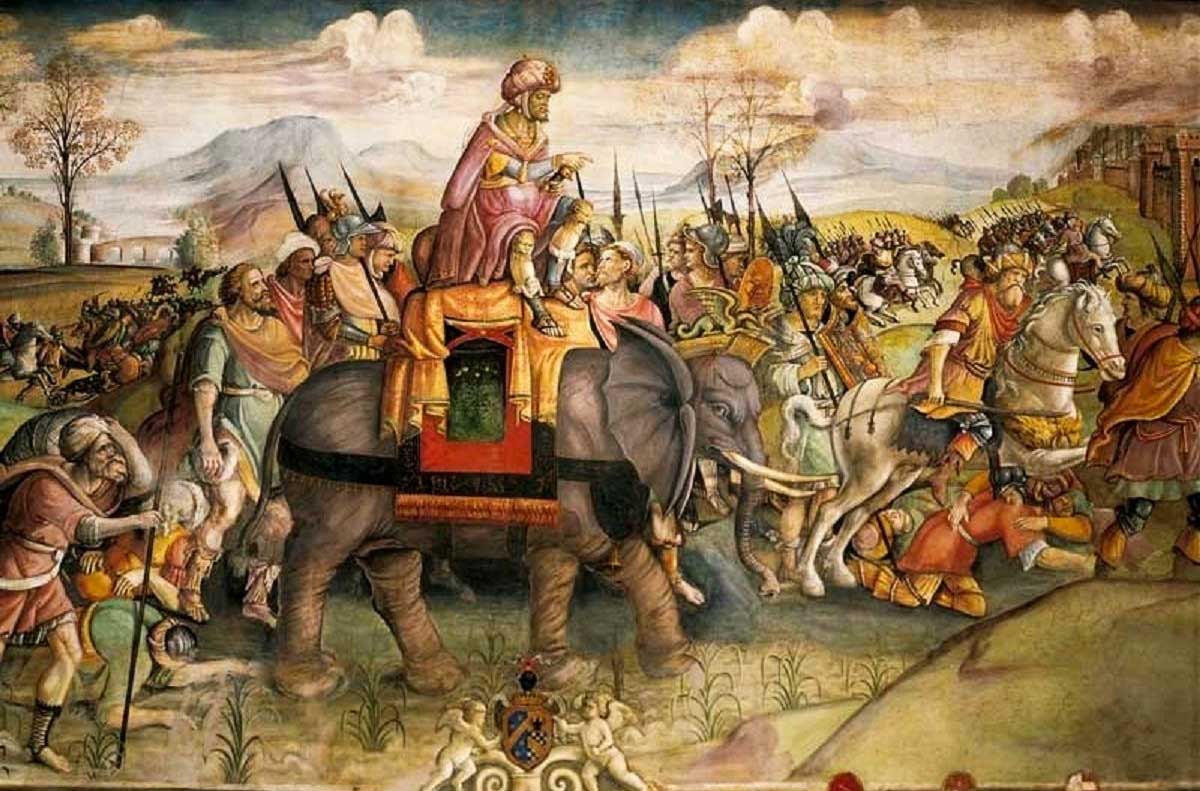 Hannibal Crossing the Alps” by Jacopo Ripanda, an Italian painter of the Renaissance era.

Hamilcar Barca (c. 275 – 228BCE) was a Carthaginian general and statesman and father of Hannibal.

Hannibal by Sébastien Slodtz (1704) is at the Louvre Museum in Paris, France.

Hannibal’s route from Spain to Italy in the Second Punic War.

Carthage Then and Now

Carthage was once one of the most powerful in the world, but today it is now a suburban town of about 20,000 residents. Carthage was one of hundreds of colonies established by merchants from Tyre. Tyre was a Phoenician city on the eastern shore of the Mediterranean Sea; today it a city of 120,000 in modern-day Lebanon. Cyrus the Great of Persia conquered Phoenicia in 539BCE, and historians believe the population of Carthage then as many Phoenicians migrated to their former colony. We don’t know much about the history of Carthage because the Romans destroyed the city and most of its records after the third Punic War.

The Romans rebuilt the city in the first century of the Common Era. The population grew to 500,000 as Carthage became a center of early Christianity. Arab warriors conquered Carthage and all of North Africa in the seventh century. The Arabs established a new city called Tunis ten miles west of Carthage. Tunis is the capital and largest city of the modern nation of Tunisia.

Carthage is now a residential suburb of Tunis and remains a popular tourist attraction. Unfortunately, very little remains of the once-great ancient city. 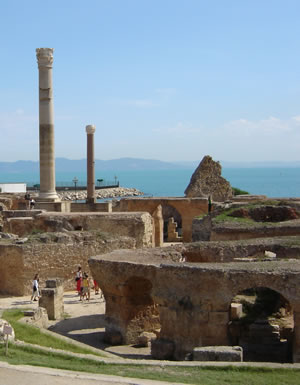 The modern city of Carthage, Tunisia is a suburb of Tunis. Carthage attracts many tourists eager to see the ruins of the once powerful city.