The grid of intersecting lines on a globe enables us to identify every location on earth with a set of numbers or letters  The ancient Babylonians divided any circle or sphere into 360 degrees.  The symbol for degree is °.  Ptolemy was a Greek thinker who borrowed the

Babylonians’ ideas as he wrote one of the first books on geography.  Ptolemy wrote that the furthest point at the right or left side of a circle or a sphere is 90 degrees from the top.  There are 180 degrees between any two sides of a circle or sphere.  This means that the north and south poles are 180 degrees apart from one another, and both poles are 90 degrees from the equator.  Geographers use Ptolemy’s calculations to create Lines of Latitude and Lines of Longitude.

Lines of Latitude are imaginary lines that circle the globe from east to west.  Lines of Latitude are called parallels because the lines parallel, or run in the same direction as the equator. The equator is the imaginary line that is as far away from the North Pole as it is from the South Pole. Lines of Longitude intersect the equator at right angles but end at the North and the South Poles.  Lines of Longitude are also called meridians.  Meridian comes from a Latin word that means midday.  The sun crosses each meridian in the middle point between sunrise and sunset. 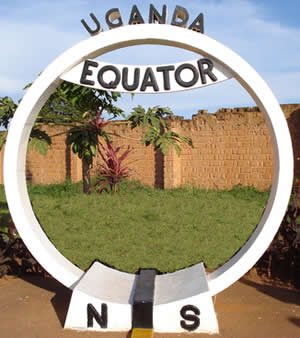 You can have one foot in each hemisphere by standing in this monument in Kayabwe, Uganda.

Resources for Longitude and Latitude

Download this lesson as Microsoft Word file or as an Adobe Acrobat file.
Listen to Mr. Dowling read this lesson. (mp3)
Watch Mr. Dowling’s Powerpoint presentation on Longitude and Latitude.


Find your longitude and latutude

Find the longitude and latitude of your home or school at World Atlas. 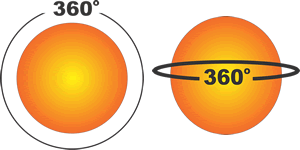 The ancient Babylonians divided any circle or sphere into 360 degrees. 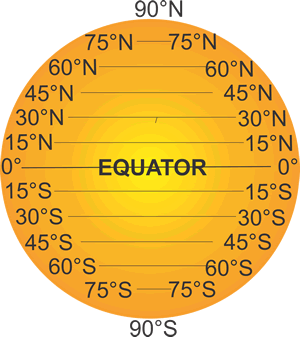 Lines of Latitude circle the globe from east to west. The line at 0° latitude is called the equator. 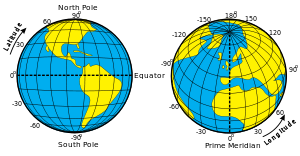 Lines of Latitude are called parallels because the lines parallel, or run in the same direction as the equator. Lines of Longitude intersect the equator at right angles but end at the North and the South Poles. 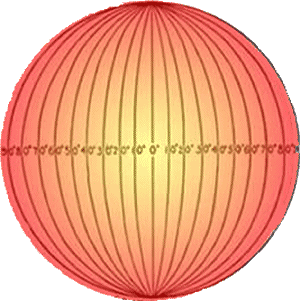 The lines that run between the North and the South Poles are called Lines of Longitude, or meridians. The line at zero degrees longitude is called the prime meridian. 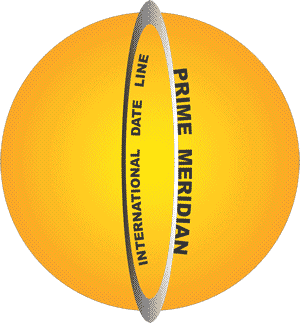 If someone were to ask for the location of the Empire State Building, you might answer that it is at 350 5th Ave, New York, New York in the 10118 zip code.  It probably wouldn’t be very helpful, but you could also truthfully answer that the president lives precisely at 40°45’04.35″N, 73°59’10.17″W.  These are examples of absolute locations.

It is often more helpful to describe your relative location.  For example, the Empire State Building is 25 blocks south of Central Park.  We could also say that the Empire State Building is across the street from McDonalds. (It really is!) Both absolute and relative location are useful tools for geographers, and we will use both throughout our study.