The Fourth Dimension – Change Over Time

Draw a straight line on a piece of paper. The line has only one dimension. Now draw a square. The square has two dimensions. A dimension is a property of space, or an extension in a given direction. Now, if you are able, draw a cube. A cube has three dimensions.

If a movie is in “3-D,” it has three dimensions and not just the two dimensions of a flat screen. In reality, you usually need to wear stereoscopic glasses that trick your mind into seeing that extra dimension — depth – up on the screen.

The distance from the floor to the top of your head is your height. Stretching your arms out, the distance from one fingertip to the other is an example of width. Putting your hands in front of you provides you with the third dimension—depth. Think about the future. It is likely that your size and shape will change over time, so in this case, time can be considered the fourth dimension.

Because our focus is on history, we will also work with that fourth dimension because the sizes and shapes of nations and regions can also change over time. In 1776, the United States consisted of only thirteen states along or near the coast of the Atlantic Ocean. By 1912, 48 states stretched across the mainland of North America. The United States expanded even further west as Alaska and Hawaii joined the union in 1959.

Soon we will go back in time to study the lands between the Tigris and Euphrates Rivers in a land that today is part of the nation of Iraq.

Your dimensions will change over time. 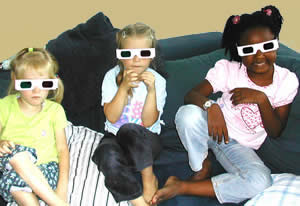 Stereoscopic glasses present two offset images the left and right eye of the viewer. These two-dimensional images are then combined in the brain to give the perception of depth.

The United States originally consisted of thirteen states. Maine, Vermont, and Florida had not yet joined the union as independent states.