Measuring Time – A History of Time

It is now possible to buy a watch or clock that synchronizes itself with the United States Naval Observatory. More than fifty clocks at the Naval Observatory measure the frequency emitted by atoms of the metallic element cesium. These atomic clocks are accurate to within one second every 1,400,000 years. In fact, our ability to measure time is more accurate than the stability of the earth. Scientists from the International Earth Rotation and Reference Systems Service add a “leap second” to the clock in many years because ocean tides are causing the earth to turn slightly slower.

The first mechanical clocks in Europe had no numbers. Most people could not read, and technology to create a clock face was not initially in place. Clocks would count out the hour by ringing a large bell high in a tower. The term o’clock is a contraction for “of the clock.”

The Romans borrowed the seven-day week from the Hebrews. The week is associated with the Old Testament, where God created the world in six days and rested on the seventh. The Romans once had an eight-day week but shortened their week when they adopted Christianity.

Our months correspond with the phases of the moon. A full moon occurs every 27 days, but in time we have adjusted the calendar in order make twelve months equal to the solar year.

Download this lesson as Microsoft Word file or as an Adobe Acrobat file.
Listen to Mr. Dowling read this lesson. (mp3). 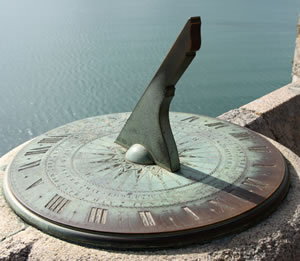 A sundial is a device that tells the time of day by the position of the Sun. As the sun moves across the sky, the shadow-edge aligns with different hour-lines.

An extra second was added to the clock 59 seconds after 11:59 on the following dates: