The Epic of Gilgamesh

The Epic of Gilgamesh

The Epic of Gilgamesh is among the earliest known works of literature. An epic is a long poem that tells the story of legendary or heroic people or gods. Like most epics, the first stories of Gilgamesh began as oral fables handed down by word of mouth. Hundreds of years after the poets first spoke of Gilgamesh; the legends were collected and recorded on clay tablets.

The story takes place nearly five thousand years ago. Gilgamesh was the king of the wealthy city of Urduk. The king was strong and handsome, but he was also cruel. Gilgamesh forced the people of Urduk to build him great palaces. He also made his subjects live in constant fear. When the people of Urduk begged the gods for help, they led Enkidu to Urduk. Enkidu was also big and strong, but he was wild and ignorant of the ways of civilized people. Enkidu was raised in the forest where he lived with the animals. When Enkidu learned of Gilgamesh’s cruelty, the wild man challenged the mighty king to fight. As the two powerful men battled, they realized they admired one another; so instead of remaining enemies, they became inseparable friends.

The unlikely pair left Urduk to embark on many adventures. Gilgamesh and Enkidu entered the forbidden Cedar Forest where the gods lived, but they soon faced a grotesque monster named Humbaba.

“in order to protect the Cedar Forest [the gods] assigned Humbaba as a terror to human beings; Humbaba’s roar is a flood, his mouth is fire, and his breath is death!”

When Gilgamesh and Enkidu tricked the beast, the powers of Humbaba were spread over the lands of Sumer.

Gilgamesh displeased the goddess Ishtar, so she sent the fearsome Bull of Heaven to destroy the crops of the Sumerian farmers. Gilgamesh and Enkidu killed the bull. This enraged the gods, so they caused Enkidu to fall ill and die.

Gilgamesh was heartbroken by the death of his friend. The king also feared that one day he would also die, so Gilgamesh began to search for the secret of eternal life. One version of the epic describes a terrible flood that covered the earth many years before the time of Gilgamesh. Gilgamesh went on a long journey to meet Utnapishtim, an elderly man who survived the flood because the gods warned him of the coming deluge. Utnapishtim told Gilgamesh,

“The life that you are seeking you will never find. When the gods created man they allotted to him death, but life they retained in their own keeping.”

Gilgamesh returned home filled with wisdom from his adventures with Enkidu and Utnapishtim. Gilgamesh became a gentle ruler who no longer mistreated the people of Urduk. Gilgamesh realized that he could not escape death, but he could live on in the memories of the people he loved.

The Epic of Gilgamesh had many parallels with to the story of Noah and a great flood in the Old Testament of the Jewish and Christian holy books. Other cultures also have legends of a great flood. The Greeks legends say a god named Zeus once unleashed a flood because he was displeased with a sacrifice made in his name. The Hindus speak of Manu, a Brahmin king who saved mankind from a deluge.

Modern science has discovered that there was a marked increase in the sea levels about 6,000 years ago as the last ice age ended. The melting ice drained to the oceans causing the sea levels to rise more than ten feet in one century. Gilgamesh and the other flood legends may be connected with the end of the ice age.

Download this lesson as Microsoft Word file or as an Adobe Acrobat file.
Listen as Mr. Dowling reads this lesson.
View the Powerpoint Presentation of this lesson. 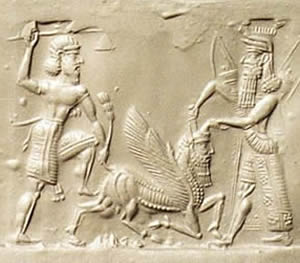 This engraving depicts Enkidu, Gilgamesh and the Bull of Heaven. 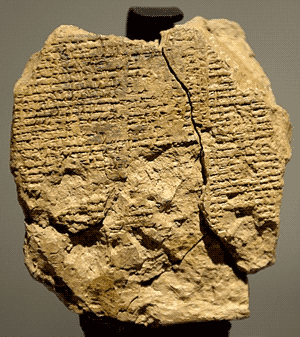 A tablet containing a portion of the Epic of Gilgamesh inscribed in cuneiform writing. 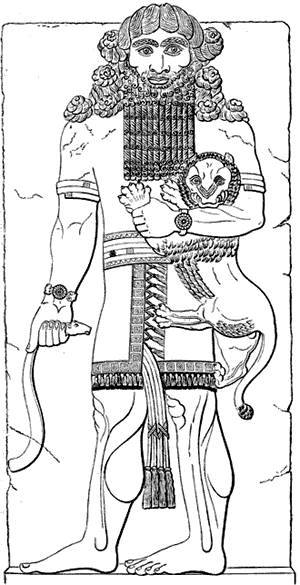 An illustration of Gilgamesh from the Chaldean Account of Genesis (1876)