Mesopotamia, the “land between the rivers” is an obvious place for a civilization because it is located near two sources of water: the Tigris River and the Euphrates River. Ancient Egypt developed along the Nile River. Most people live near water. If you look at any large city, you’ll probably find water nearby. People need the water for drinking, cooking, cleaning and transportation.

Many cities formed where freshwater rivers meet the ocean. New York City is located where the Hudson River meets the Atlantic Ocean. In America, New York City has a harbor. A harbor is a place where ships can seek shelter from stormy weather. Chicago grew alongside the point where the Chicago River flows into Lake Michigan. The point where two rivers meet is known as a confluence. St. Louis, Missouri is situated near the confluence of the Mississippi and the Missouri Rivers.

A few cities are not near a significant source of water. Riyadh, Saudi Arabia and Tehran, Iran once had sources of water that no longer exist. Johannesburg, South Africa developed after the discovery of gold in 1886. The Chattahoochee River near Atlanta, Georgia is not a significant source of water. Atlanta developed as a trading city because it was the point where two railroads met. Modern technology has made it possible to bring water to very dry places, but for most of history, it was necessary for a city to be near a source of water.

Download this lesson as Microsoft Word file
or as an Adobe Acrobat file.
Listen as Mr. Dowling reads this lesson. 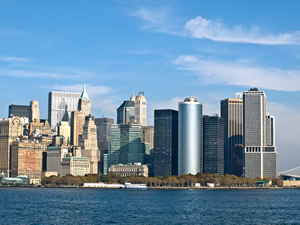 New York City is located at the point where the Hudson River flows into the Atlantic Ocean. 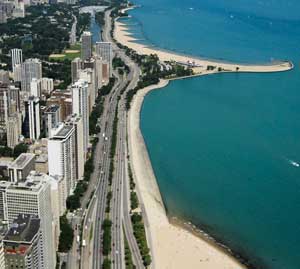 Some of the most expensive real estate in Chicago along Lakeshore Drive, where the city borders Lake Michigan. 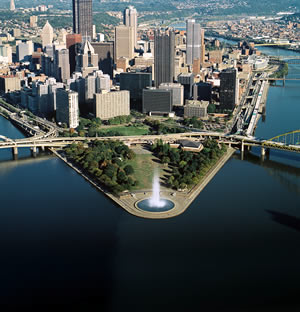