A mysterious city developed in the Central Valley of Mexico about 100BCE. It flourished for centuries until it was inexplicably destroyed about 650CE. The city featured two massive pyramids, a magnificent boulevard lined with temples and mansions, and the first apartment buildings in the Americas. Their people also practiced human sacrifice, and their brutal military conquered cultures throughout Mesoamerica.

The truth is that we don’t know what these people called themselves. We call the city Teotihuacan (pronounced tay-oh-tee-wah-KAHN), a term the Aztecs would use when they occupied the site centuries later.

People first settled along the banks of Lake Texcoco in the Valley of Mexico about 300BCE. They farmed the land and mined a stone called obsidian, which they made into jewelry, knives, and other tools. By about 100CE, Teotihuacan developed into a commercial city, home to sculptors, painters, and potters.

Reaching a height of over two hundred feet, the Pyramid of the Sun is the third largest pyramid in the world. It was constructed about 100CE and expanded about 150 years later. Deep inside the pyramid, excavators found a 400-pound statue of Huehueteotl (pronounced we-we-TE-OH-tel), a fire god associated with wisdom. The pyramid was originally constructed over a deep cave. Scholars think the cave may be somehow connected to the ancient civilization’s belief in the underworld, where they believed their gods and ancestors lived.

The Avenue of the Dead was the city’s main thoroughfare. Smaller temples and homes for the ruling elite of the city lined the boulevard. A grid system of streets radiated from the avenue, creating the first urban infrastructure in the New World and access to housing for Teotihuacan’s workers.

About 250CE, the city stopped building pyramids and turned its attention to constructing apartment complexes. Excavators have found over 2000 apartment compounds, each housing between fifty and one hundred people. Most apartments were comfortable homes for tradespeople.

The city slowly began to decline in influence in the mid-400s. About 650, it was mysteriously abandoned and burned. Perhaps Teotihuacan was invaded, or its citizens may have faced a natural disaster such as an earthquake or a drought. Centuries later, the Aztecs settled along the lake and were so impressed by its pyramids that they named it Teotihuacan, or “city of the gods.” 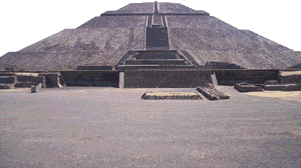 The Pyramid of the Sun 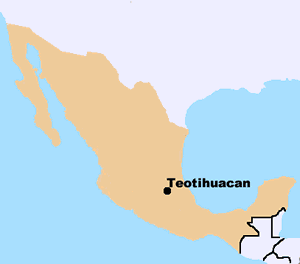 Location of Teotihuacan in present-day Mexiico 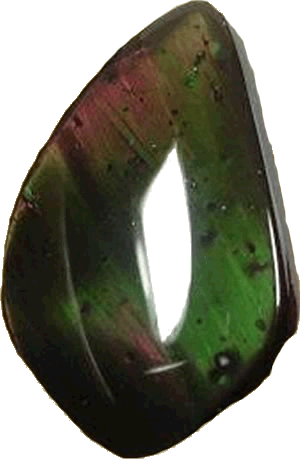 People moved to the Central Valley of Mexico to mine obsidian. Obsidian is a volcanic glass stone that fractures with very sharp edges, so it can be used to make knives and other sharp objects. 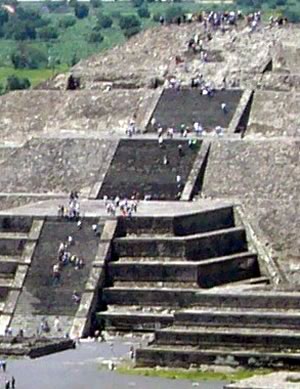 The 248 steps leading to the top of the Pyramid of the Moon are a major tourist attraction in Teotihuacan. 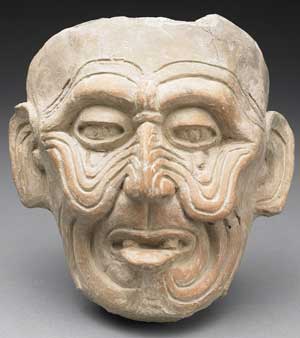 In 2013, archaeologists found a statue of the god, called Huehueteotl in a hidden temple inside the Pyramid of the Sun. Huehueteotl was known to several Mesoamerican societies including the Olmecs and the Aztecs, who associated him with fire and wisdom.