Home » America Before Columbus » The Olmecs
Previous
Next
The Olmecs

In the late 1850s, near the village of La Venta in southern Mexico, a farmer was clearing land when he discovered a dome-shaped rock. He dug out the land to find a nearly six-foot-tall stone sculpture of a head. Writing on the back of the head indicated that it was fashioned in 32BCE. This unnamed and now forgotten farmer had found the first evidence of the mysterious Olmec culture.

About 1800BCE, the Olmecs first appeared in the densely forested land near the gulf coast of southern Mexico. Their population grew as Olmec farmers learned to produce more food. They planted squash, tomatoes and peppers, but their primary crop was corn. The Olmecs developed the first advanced civilization of the Americas in the dense jungle.

The Olmecs studied astronomy and developed a system of writing and mathematics. They were the first Mesoamerican culture to build pyramids. Their calendar and religious beliefs appear to have influenced later cultures. In fact, many scholars call the Olmecs the “mother culture” of Mesoamerica.

We don’t know much about Olmec ball games, but archaeologists have found evidence of courts for playing and stadiums for watching these games throughout the region. The games appeared to be played with a solid rubber ball and seemed to require great skill. Some evidence suggests that the game was played as part of a religious ceremony.

The Olmecs lived in a swampy region with no natural rocks. The basalt stone used to make the heads apparently came from mountains more than one hundred miles away. Olmec workers somehow transported the stone through dense jungles and across major rivers without the use of the wheel.

The Olmecs occupied three successive cities that were all eventually destroyed. The first, now called San Lorenzo, occupied nearly three square miles. Then, about 1200BCE, San Lorenzo was abandoned at about the same time a bigger city grew near La Venta. La Venta, too, was destroyed about 350BCE, but we don’t know why. The archaeological evidence suggests that the population in the region suddenly declined.

The Olmecs lived in one of the wettest regions of Mesoamerica, so it did not take long for the jungle to reclaim the land. We don’t know if the Olmecs evolved into other cultures, or if they left or died out.

Two hundred years ago, the Egyptian civilization was equally mysterious. But in 1823, Jean Champollion deciphered their hieroglyphic writing. Likewise, archaeologists have made great advances in understanding the history of Mesoamerica in the last few years. So, it is possible that the mysteries of the Olmecs and other civilizations of the region will soon be explained. 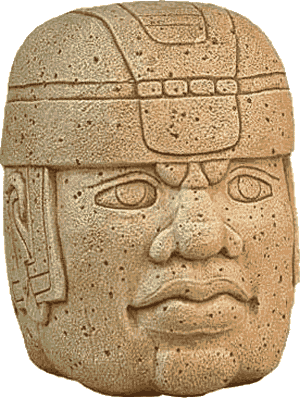 All of the Olmec colossal heads wear what appear to be helmets. Some archaeologists have suggested that the sculptures represent rulers who played a ceremonial ballgame. 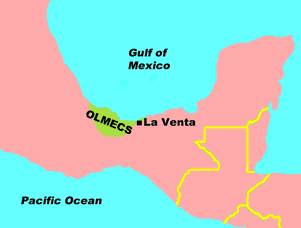 From about 1800BCE to about 400BCE, the Olmecs lived in the tropical lowlands of south-central Mexico. 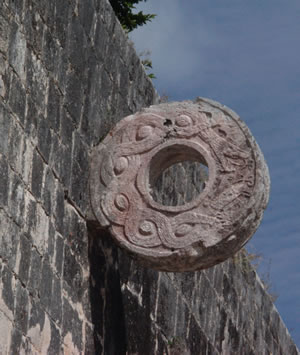 From about 1800BCE to about 400BCE, the Olmecs lived in the tropical lowlands of south-central Mexico.

We don’t know what the Olmecs actually called themselves. Archaeologist Matthew Stirling coined the term after he explored the region in 1939. ‘Olmec’ was a term used by the Aztecs to describe a completely unrelated culture who lived in the region thousands of years after the end of the mother culture.

Olmec means “people of the land of rubber,” because the later culture produced latex from the sap of a tree that grows in the region. Many archaeologists wanted to solve the confusion by naming the mother culture “La Ventura,” after the site where the first colossal head was unearthed. Author Charles Mann wrote in 1491: New Revelations of the America Before Columbus, “Almost everyone agreed that the new name was a big improvement, logically speaking. Unfortunately, nobody used it. Not for the first time in Native American history, the confusing, incorrect name prevailed.”