Home » America Before Columbus » The Maya
Previous
Next
The Maya

Deep in the jungle of Mesoamerica, a group of Maya city-states flourished for over a millennium. The Maya constructed great temples to bloodthirsty gods, then mysteriously went into a period of decline not once, but twice. Finally, by the time the Spanish arrived in 1517, little remained of the Maya beyond the legends and the clues they left behind for explorers to discover.

Archaeologists found evidence of Maya farming by about 400BCEin the lowlands of what today is the southernmost part of Mexico, El Salvador, Belize, and eastern Honduras. The Maya cultivated squash, beans, potatoes, tomatoes, and cocoa, but corn was their primary food source and the reason the Maya population grew. Modern science indicates that over 70% ancient Maya diet came from corn.

The Maya believed that the gods created humans from dough made of corn and blood. To repay the gods, the Maya offered animal and human sacrifices. Maya inscriptions describe gruesome rituals that included priests removing the hearts of victims to satisfy the gods. Maya priests also cut themselves and sacrificed their own blood to worship their gods.

The most honored god in the Maya pantheon was Chaac, who provided rain to the Maya farmers. There are few rivers in the region, so the Maya were dependent upon Chaac’s kindness. Later Maya built huge cisterns to collect and store rainwater to provide citizens through months of drought.

Maya astronomers studied the heavens and kept careful records for their religious observances because the Maya believed sacrifices to the gods had to be carefully timed. The Maya used two calendars. An everyday calendar with 13 months of 20 days each was probably related to the appearance of the planet Venus. The Greeks and the Romans associated the planet Venus with the goddess of beauty, but the Maya seem to have associated Venus with war. The Maya also had a solar calendar that was similar to our own. Dates were so important that many Maya named their children after the name of the date of the birth.

The Maya created their calendar using a sophisticated mathematical system. While our mathematics is based on the number ten – or ‘base ten’ – the Maya had a base twenty system. They represented one to four with dots. Five was a bar. Six to nine was a bar with dots above. Ten was two vertical bars. They drew a shell to represent zero. The system could be repeated to twenty.

Numbers bigger than twenty were depicted as stacks of multiples of twenty raised to various powers. The system was flexible and allowed Maya mathematicians to calculate sums that went up to the hundreds of millions.

The Maya were not a unified empire, but a collection of city-states ruled by kings. The king and the priests who advised him taxed the farmers and craftsmen of their state, oversaw justice, administered nearby villages, and waged war.

Maya civilization thrived in the southern lowland Yucatan Peninsula from 250 to 900CE, then suddenly collapsed. There was a dramatic drop in population. Maya cities such as Copán and Tikal were abandoned and all new construction apparently stopped. We don’t know what happened, but theories include overpopulation, over-cultivation, drought, erosion, deforestation, warfare among cities, and internal rebellions. The collapse was probably a result of many of or all all of those factors to varying degrees. Historians refer to the period from 250 to 900 as the Classic Period of Maya history.

After the fall of the Classic Period, about seven new Maya cities including Uxmal and Chichén Itzá formed in the northern Yucatan Peninsula. These post-classical Maya constructed large canoes that allowed them to dominate trade throughout Mesoamerica.

Then about 1200CE, the post-classical Maya cities began to collapse as mysteriously as their earlier counterparts. The last significant Maya city remained at Mayapán. In 1441, Mayapán was sacked, burned, and abandoned after a revolt by its neighbors. One of the groups leading the revolt was the Mexica, a new group that was consolidating power in the central valley of Mexico. History knows the Mexica as the Aztecs—the next great power in the region.

El Castillo (Spanish for “the castle”), dominates the center of the Chichén Itzá archaeological site. 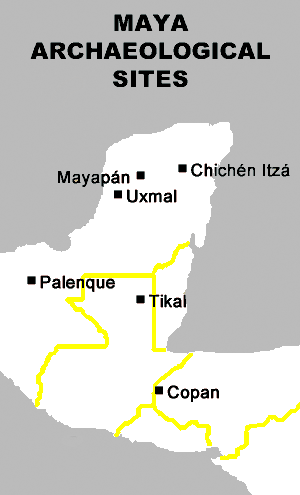 A map of the primary archaeological sites of the Maya culture. 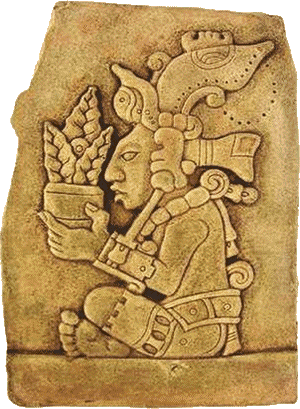 Yum Kaax was a god of wild plants and of animals. 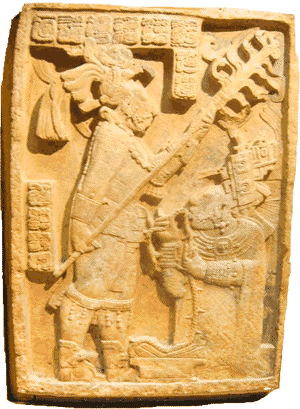 This carving depicts a Maya ruler holding a torch while his queen pulls a studded rope studded her tongue. The carvings on the top left indicate the date as October 29, 709CE.