Francisco Pizarro and the Fall of the Incas

The Fall of the Incas

In 1532, the Inca Empire fell to a Spanish force of only 168 men and 62 horses. Francisco Pizarro and his conquistadors crushed one of the world’s mightiest empires without a single Spanish casualty. Pizarro had cannons, gunpowder and armor, but the Incas vastly outnumbered his small army. Pizarro’s good fortune was to arrive in the Andes at the exact moment when the Incas were wracked by a great sickness and divided leadership.

Huayna Capac was the last of three great Inca rulers. In 1520, he marched an army north to capture land that is now part of Ecuador. The Inca ruler sent his son, Atahualpa (at-a-WHAL-pa), to lead an expedition into enemy territory, but the younger man was ambushed and forced to retreat.

Huayna Capac took command of his army to avenge the humiliation of his son. After many long and bloody battles, Huayna Capac subdued his foes. Enjoying the climate of his newly conquered territory, the Inca ruler ordered that a new palace be constructed for himself and his son.

The Sapa Inca (“Sole Ruler”) ruled from his northern palace for five years, until a great sickness passed through his empire. Modern evidence suggests that the sickness was smallpox, a European disease carried south by traders long before the first European arrived in Inca territory. Smallpox spread throughout the trade routes of the empire and may have taken the lives of more than 200,000 people.

Atahualpa had not distinguished himself, so when Huayna Capac became ill, he passed over Atahualpa and named another son to replace him. Before the ruler died, though, the illness also killed his heir.

When the Inca nobles in Cusco, the Inca capital, learned of Huayna Capac’s death, they named another son, Huáscar, to be Sapa Inca. Atahualpa, who had been living with his father in the northern capital, declared himself to be ruler. Both brothers had powerful armies. Huáscar commanded the royal army in Cusco, while Atahualpa commanded the northern army used to expand the empire. The two sons of Huayna Capac plunged the empire into a brutal civil war.

Atahualpa and Huáscar called on the mummified bodies of past Sapa Incas to assist them. The Incas believed their rulers were living descendants of Inti, the sun god. When the Sapa Inca died, his body was preserved and treated as if it were still living. Mummies were carried into battle to advise the generals.

The civil war seemed to end in 1532 when Atahualpa’s army captured Huáscar. Huáscar watched as his wives, children, and relatives were executed in front of his eyes. Then, as Atahualpa made his triumphant return to Cusco as Sapa Inca, word spread of the arrival of bearded pale men riding atop huge animals.

The Inca did not know of writing, horses, or metal weapons, so what happened next took the empire by surprise. A priest appeared before Atahualpa and the Incas as Pizarro kept his horses and cannon hidden from view. The priest presented Atahualpa with a holy book, telling the ruler that it was the word of God. The Sapa Inca did not understand writing, so he tossed the book on the ground. When the book dropped, Pizarro waved a white scarf to signal the attack to begin.

Spanish soldiers on horseback began to charge as others pulled the cannon from hiding and fired into the crowd. The terrified Incas trampled one another as they attempted to flee. Pizarro grabbed Atahualpa and dragged the Sapa Inca through the crowd as a hostage.

Learning the Spanish valued silver and gold, Atahualpa promised to fill a room bigger than his prison with gold and silver in exchange for his freedom. The Inca ruler sent word to his generals first to kill Huáscar, then to strip Cusco of gold and silver metals and turn it over to his captors as ransom. The Sapa Inca had not lived in the city for many years, so he had little attachment to Cusco or the people who lived there. For the next six months, precious metals were carted away from Cusco to Pizarro’s small camp. The Spaniards melted the gold and silver down to bricks and shipped the precious metals to Spain.

Having kept his promise, Atahualpa expected to be freed. But Pizarro feared that his conquest would be in danger if the Sapa Inca lived, so he put Atahualpa on trial for killing Huáscar. A court of Pizarro’s soldiers found the Sapa Inca guilty. When Atahualpa was strangled, his body was left to remind the Incas that their empire had been conquered. 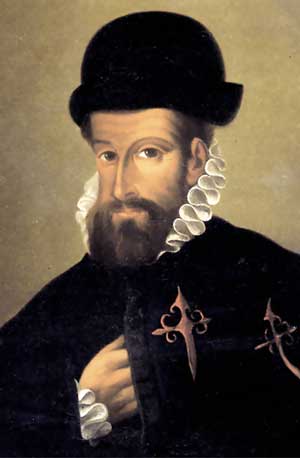 Spanish conquistador Francisco Pizarro (c. 1475 – 1541) conquered the Incan Empire. A distant cousin of Hernán Cortés, Pizarro sailed to the Americas in 1509. Four years later, he accompanied Vasco Núñez de Balboa to the Pacific. Pizarro reached the Inca Empire on his third expedition to South America. Pizarro was stabbed to death by a fellow Spaniard in 1541. 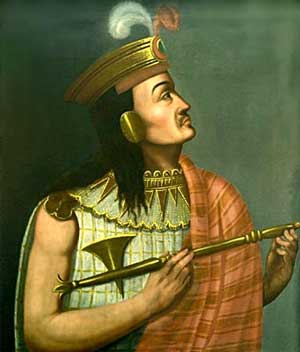 Atahualpa (c.1500 – 1533) was the last Sapa Inca before the Spanish conquest. Atahualpa became emperor when he defeated and executed his older half-brother Washkar in a civil war sparked by the death of their father, Huayna Capac, from smallpox. Spanish conquistadors led by Francisco Pizarro captured and executed executed Atahualpa in 1533. 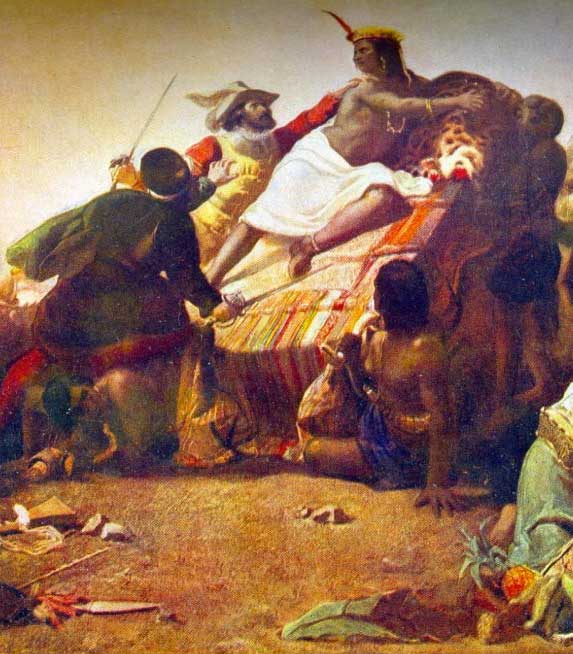 From “Pizarro Seizing the Inca of Peru” by John Everett Millais (1846).