Life in the Inca World

Life in the Inca World

The Incas lived high in the Andes, a mountain range along the western edge of South America. They lived without horses, iron tools, the wheel, or writing. But in the space of less than 100 years, they built spectacular cities of stone and ruled over millions of people.

By 1491, the Inca controlled an area that stretched more than 2500 miles from north to south, but in some places no more than fifty miles from east to west. This immense area included perhaps ten million people. At its height, the empire of the Incas rivaled the Mongols, the Romans, or Alexander the Great.

The Incas adapted to life in the Andes. The climate of their empire ranged from frigid cold to desert or tropical, often within a few miles due to the steep, rocky slopes of the Andes.

The empire included speakers of over 100 languages, but Inca rulers spoke Quechua, still the speech of 8 to 10 million people in the mountains of Peru, Bolivia, and Ecuador.

Although the Incas did not know how to forge iron, they crafted great cities using only stone tools. Inca engineers constructed walls with huge blocks that fit together without the use of mortar. Despite the location of their empire in an earthquake-prone region, many Inca buildings remain standing today.

Many of the empire’s most impressive buildings were in Cusco, the Inca’s capital city. Four wide gateways in the city led to an enormous raised plaza at its center. The plaza was carpeted in white sand carried up the Andes from the Pacific Ocean and raked daily by workers. The walls surrounding the plaza were hewn from enormous blocks of stone which were cut so finely that one explorer said, “the point of a pin could not have been inserted in one of the joints.” Cusco means “navel,” for the Incas believed their capital was the center of the world and the sacred home of their gods.

The Inca’s greatest engineering achievement was a network of more than 14,000 miles of roads and bridges. Relay runners called chasquis (CHAH-skis) were trained to carry messages from the emperor to the furthest reaches of his realm.

Chasquis needed to have strong minds and strong legs. The Incas did not have writing, so each runner would have to memorize his message and immediately run to the next station.

Some chasquis carried quipo, (KWEE-po) lengths of variously colored knotted strings tied to a central cord. Inca rulers used the “talking knots” to keep records of who paid taxes, how often roads were maintained, and where troops were stationed. The chasquis delivered the messages, but only specially trained scholars understood the messages hidden in the colors and weaving of this mysterious system.

Though the roads were well maintained, the chasqui has to run up and down the steps of mountains. The Incas had no use for the wheel because they lacked strong animals capable of pulling a cart or plow.

The largest animals the Inca knew were llamas —distant relatives of the camel. Although llamas are capable of carrying only a small amount of weight on their backs, they are nimble enough to navigate the steps of the Inca road system.

The Incas crossed canyons and rivers with swinging bridges constructed of rope. Inca engineers developed a canal system and built huge cisterns to hold water for the dry seasons.

Inca farmers cut strips of level land called terraces into the mountains. The terraces provided the Incas with flat surfaces to grow peppers, squash, peanuts and maize. The forbidding climate forced the Incas to rely heavily on root vegetables such as the potato and manioc. Manioc is also known as tapioca.

The lack of large animals limited meat in the Inca diet, but they hunted deer, llamas, ducks and guinea pigs. The Inca road system made it possible to transport fish from the Pacific Ocean to villages high in the Andes.

Spanish conquistadors vanquished the Incas in 1533. In the years that followed, Spain imposed laws forbidding local customs. They required the Incas to adopt Spanish customs and clothing. Resistance from the Andes continued for centuries. Today, Spanish is the primary language of western South America, but in 1993, the Constitution of Peru declared Quechua—the language of the Incas—to also be official. 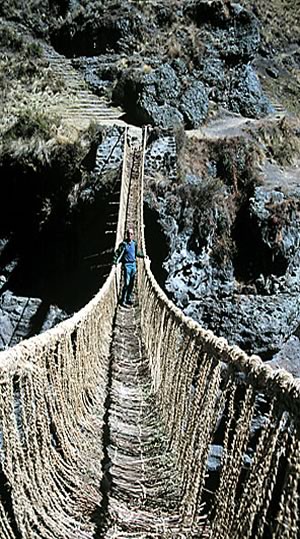 The Incas crossed canyons and rivers with swinging bridges constructed of rope.

The “talking knots” the Incas called Quipu. Camayocs were Inca officials charged with reading quipus. The camayocs stored a vast collection of quipus in pottry jars in the Inca capital at Cusco. 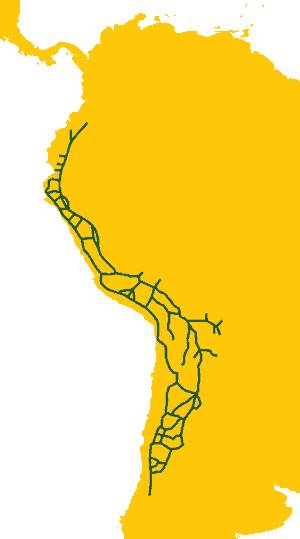 The Incas built a transportation network of more than 14,000 miles of roads and bridges. 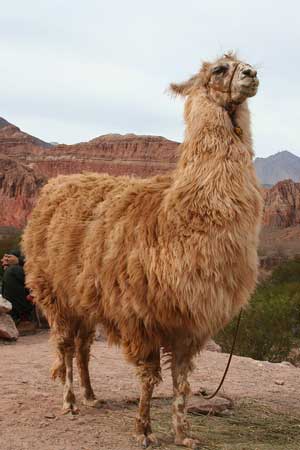 The largest animals the Inca knew were llamas—distant relatives of the camel. Although llamas are capable of carrying only a small amount of weight on their backs, they are nimble enough to navigate the steps of the Inca road system. 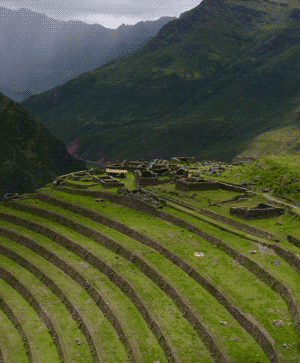 The Incas has to create flat land to farm, so they made terraces. The steps of the terraces allowed the Incas to grow peppers, squash, peanuts, and maize.