Home » America Before Columbus » The Incas
Previous
Next
The Incas

It is 1493, and you struggle to breathe the thin mountain air of the Andes Mountains more than 10,000 feet above sea level. From afar, you witness a grand spectacle: the arrival of Huayna Capac, the ruler of the Four Regions.

Huayna Capac is carried in a great chair because he never walks in public. The ground is too dirty to accept his saliva, so the ruler spits into the hand of an attendant. The attendant then wipes his hand with a special cloth. The cloth and anything Huayna Capac has touched was sacred. It would eventually be burned in a great ceremony so that it did not fall into the hands of common people.

Huayna Capac was the Sapa Inca, or “sole ruler” of Tawantinsuyu, a local word that means “four regions.” We know Tawantinsuyu by the title of their powerful rulers: the Incas. The Incas formed one of the world’s greatest empires in the forbidding climate of the Andes, the tallest mountains of the Western Hemisphere. 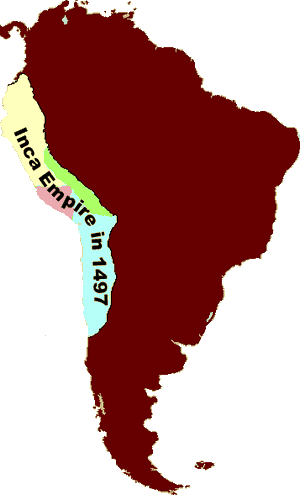 Quilla was the moon and Inti’s wife. The Incas would watch throughout the month as Quilla would grow from a small sliver in the sky to a beautiful sphere that lit the night, only to recede and return the next month. The children of Inti and Quilla were the stars.

Despite the severity of the high altitude climate, the Incas were at least the third empire to develop in the Andes. The Chavìn controlled the coastal regions of what is now Ecuador, Peru, and Bolivia as early as 900BCE. They were followed by the Wari (500 – 1100) and the Tiwanaku (tee-wan-AH-ku) (300 – 1000CE) in the south. The Inca did not gain prominence until after the fall of the Wari and the Tiwanaku.

Pachacuti (pah-chah-COO-tee)— Huayna Capac’s grandfather—ruled from 1438 to 1471. Pachacuti transformed the kingdom of Cusco in modern Peru to a mighty empire through negotiation and warfare. He sent representatives to local rulers inviting them to join his empire. If the local ruler refused, Pachacuti sent his brutal army to force them to give up.

Pachacuti was probably the emperor who ordered the construction of the mysterious Machu Picchu. Located 7000 feet above sea level near Cusco, Machu Picchu probably served as a country estate for Pachacuti. The site includes more than 200 buildings and three large temples. Because the city was inaccessible for hundreds of years to outsiders, it is the best remaining example of an Inca city.

For hundreds of years, explorers had heard tales of  a city so high it was always hidden by clouds. In 1911, Yale professor Hiram Bingham found Machu Picchu and later wrote about it in National Geographic. Bingham has often been compared with Indiana Jones in “Raiders of the Lost Ark.” The “Lost City of the Incas” is now easily reached by railroad. Every year, thousands of tourists flock to what has become the most familiar icon of Inca civilization.

In 1532, Francisco Pizarro conquered the Incas and claimed their land for Spain. By that time, the glory of the Inca empire had faded. Huayna Capac and his eldest son died only a few days apart in 1527, possibly from smallpox. The European disease seems to have reached the Andes even before the arrival of the first Spanish conquistadors.

The Inca Empire fell into the hands of Huayna Capac’s younger sons, who fought a civil war that weakened the empire. Wracked by disease and divided leadership, the Incas were no match for the guns and cannons of their invaders. 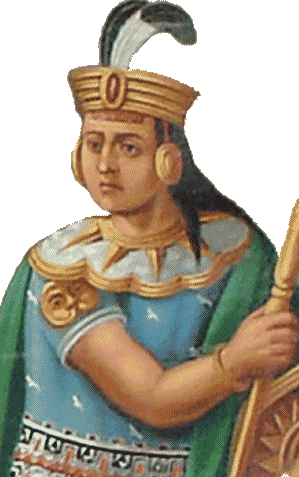 The Incas believed both the mother and the father of the Sapa Inca had to be the direct descendant of Inti, the sun god. It was essential that the Sapa Inca’s holy bloodline not mix with that of any other family. For this reason, only his sister was pure enough to be the Coya Inca and mother of the next ruler.

The coya was the Sapa Inca’s official wife, but Inca custom allowed the rulers to have as many secondary wives as he wished. Historians believe that some Inca rulers fathered more than one hundred children. Later in life, the Sapa Inca would choose the most qualified of his sons to succeed him as ruler. 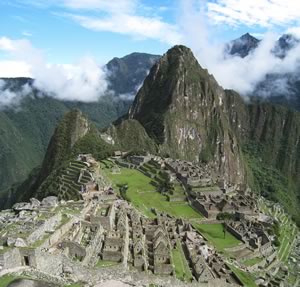 Machu Picchu includes more than 200 buildings and three large temples. Because the city was inaccessible for thousands of years, it is called “the Lost City of the Incas.” Today Machu Picchu is the most familiar icon of Inca civilization.

The Incas believed that Viracocha was even more powerful than their sun god, Inti. Viracocha was the invisible and unknowable force that created the earth and humankind at the beginning of time. He provided the world with three gods to help them. Inti and Quilla were the sun and the moon. Illapa was the frightening god of storms. The Inca knew to respect and honor Illapa’s noisy thunder and lightning bolts. Without Illapa’s help, Inti could not provide the Incas with the crops they needed to survive.

When Viracocha created humans, he painted them with different clothing and taught them distinctive languages and customs. He selected the Incas as his Chosen People to be ruled by the Sapa Inca, the son of Inti. Viracocha can’t be seen or heard, but he makes it possible for Inti to rise each morning, for Quilla to preside over the night, and Illapa to carry water from Viracocha’s seas to farmland.