Egypt After the Pharaohs

At the time the French soldiers found the Rosetta Stone in 1799, much of what we know about the history of ancient Egypt was a mystery. The Egyptians were very reluctant to accept new ideas; they looked to the past for protection from the gods who they believed created their special land. The era of the pharaohs faded as Egypt became easy prey for invading armies with more advanced weapons. Armies from Persia, Assyria, Kush, and Nubia dominated Egypt until a Greek military leader conquered the ancient kingdom in 332BCE.

Alexander the Great created the largest military empire the world had ever known, but he died suddenly in 323BCE.  Alexander’s empire was split among his top generals.  Ptolemy established a Greek dynasty that controlled Egypt for nearly three hundred years.  The Ptolemaic dynasty fell to the Romans when Caesar Augustus defeated Cleopatra, the last queen of Egypt in 44BCE.

A Turkish army seized Egypt in 1517 and made the ancient and mysterious land part of the Ottoman Empire. The French army that found the Rosetta Stone invaded Egypt in 1798, but the French fell to the British three years later. A revolt by Egyptian soldiers in 1952 forced the British out of Egypt; since that time, Egypt has been an independent nation. 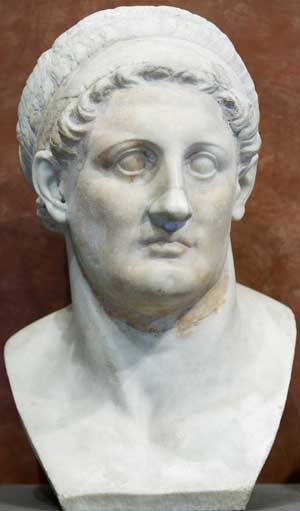 Ptolemy I (c. 367 – c. 283BCE) was a Greek Macedonian general under Alexander the Great. Ptolemy ruled Egypt for forty years beginning in 323BCE.