The Indentured Servants of the Caribbean

Spanish, English, French, and Dutch colonists began to settle on the Caribbean islands. The settlers grew tobacco, spices, and indigo, a plant used to make blue dye. They imported indentured servants to work.

Indentured servants were people who worked without pay. Europeans who owned money they could not pay back were often sent to prison. The servants signed contracts that required them to work from three to seven years in exchange for paying off their debts. The services of these immigrants were sold to the highest bidders after their arrival in the colonies. Their life on the Caribbean plantations was one of hard, physical labor and abusive conditions. At the end of their period of indenture, the former servants were absorbed into the general population.

The tobacco grown in Virginia was superior to the Caribbean crop, so plantation owners turned to sugar, which became the primary crop of the Caribbean. Sugar cultivation requires a great deal of backbreaking labor. The plantation owners lowered their cost of labor by replacing their indentured servants with African slaves. 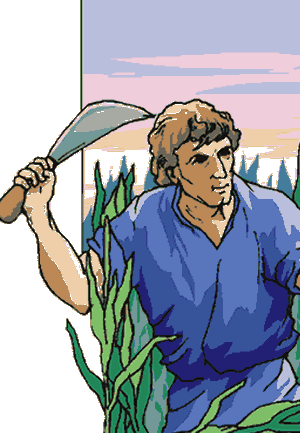 Sugar has been the primary crop of the Caribbean for centuries.