In the second half of the 14th century, European sailors began to plan voyages that would take them beyond the limits of the world they knew. The new interest in the world came in part from the Renaissance, but the main reason was to set up new trading links with spice-producing lands in Asia.

Spices were an essential part of everyday life for the Europeans. Refrigeration had not yet been invented, so the only way to preserve meat was to salt it. Adding spices helped to hide the salty taste. The spices also concealed the taste of meat that had gone bad.

The Turks defeated the Byzantine Empire in 1453, cutting the land link between Europe and Asia. If spices were to reach Europe, a sea route to Asia had to be found. Prince Henry the Navigator of Portugal set up a school for sailors and encouraged the exploration of the African coast. In 1486, Bartholomeu Dias and his crew became the first Portuguese sailors to reach the southern tip of Africa, but he turned back because his crew was unwilling to travel any further. Ten years later, Dias helped another Portuguese sailor, Vasco da Gama, plan a voyage around Africa to India.

Christopher Columbus hoped to reach India by sailing west. When the Portuguese king would not sponsor his voyage, he asked Ferdinand and Isabella of Spain. After six years, they agreed. When Columbus reached a group of islands across the Atlantic Ocean in 1492, he was certain he had reached his goal. Columbus called the native people Indians. This is why the Caribbean islands are known as the West Indies. Columbus made three more voyages to the Caribbean, but he never realized his mistake. 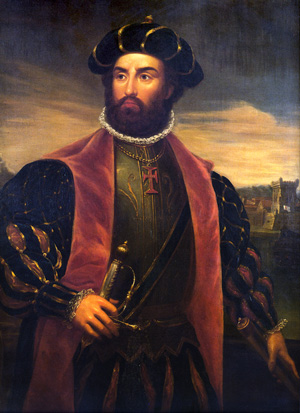 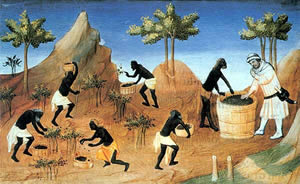 This Illustration of workers harvesting pepper comes from a French edition of Travels of Marco Polo. 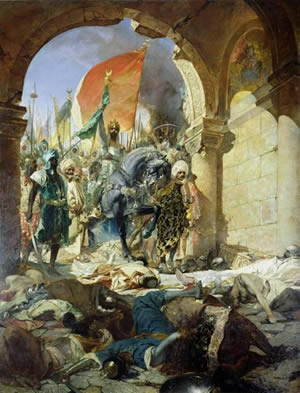 Entry of the Turks into Constantinople by Benjamin Jean Joseph Constant (c. 1876)