Niccolò Machiavelli was one of the most influential writers of the Renaissance. Although he wrote on many topics, Machiavelli is best remembered for the political advice he offered in 1513 in The Prince.

Machiavelli was a military official of the Florentine government for a brief period when the Medici family was out of power. In 1512, Giovanni di Medici, helped by Pope Julius II, led an army to conquer the city. Shortly after, Julius died and Giovanni was elected Pope Leo X.

With the Medici back in power, Machiavelli was imprisoned and subjected to torture. After his release, Machiavelli retired from politics to write his masterpiece.

From his experience with the Medici, Machiavelli believed the Italian peninsula could not be united unless its leader was ruthless. He wrote of the possibility of a “new prince” who might rule in place of the Medici. He advised this prince to be calculating.

Machiavelli counseled the ruler to be kind only of it suited his purposes. Otherwise, he warned, it is better to be feared than loved.

Machiavelli’s book became one of the most influential books in history. The term machiavellian is used today to describe conduct associated with ambition, deceit, and brute force. 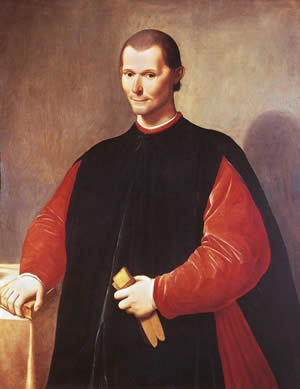 Niccolò Machiavelli (1469–1527) was an Italian historian, politician, diplomat, and writer based in Florence during the Renaissance. 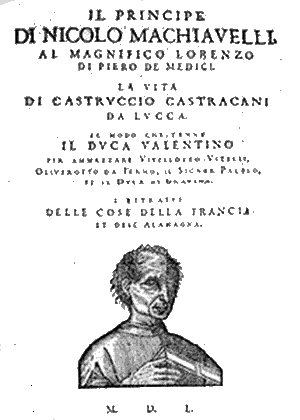 The tltle page of Niccolò Machiavelli’s The Prince (1532)