Aristotle first theorized that the earth was round. Columbus died believing he proved Aristotle correct, but the real confirmation came in the expedition of Ferdinand Magellan, the captain of the first ship to sail completely around the world.

Magellan was a Portuguese sailor who explored Asia. While he was in Asia, Magellan enslaved an Asian boy he called Enrique.  Years later, Enrique would confirm to Magellan that his ships had sailed to the east by traveling west. Magellan asked the King of Portugal to finance an expedition around the world. When the king rejected him, Magellan disowned his allegiance to Portugal and offered his services to Spain.

Magellan left Spain in 1519 with five ships. It took more than fourteen months to find the southern opening to the Pacific Ocean. He found it in the frigid, stormy waters now known as the Strait of Magellan. What Magellan did not count on was the immensity of the Pacific, a body of water larger than all of the land on earth. Magellan expected Asia to be a few hundred miles past beyond the coast of South America. Instead, the expedition traveled 12,600 miles before reaching land.

The starving sailors arrived on the island of Guam after more than six months at sea, and then moved on to the Philippines. While in the Philippines, Magellan discovered that Enrique could understand the native language. Magellan realized that Enrique had become the first person to travel completely around the world.

Magellan had survived eighteen months at sea, but he was killed in battle in the Philippines. A local warrior persuaded Magellan to defeat his rival in battle. Most of Magellan’s men considered the battle both pointless and dangerous, so they refused to participate. Magellan was hit with a poison arrow in the battle and died.

One of Magellan’s five ships did make it back to Spain, only twelve days less than three years after their journey started. Only eighteen sailors remained of the 265 men that accompanied Magellan. 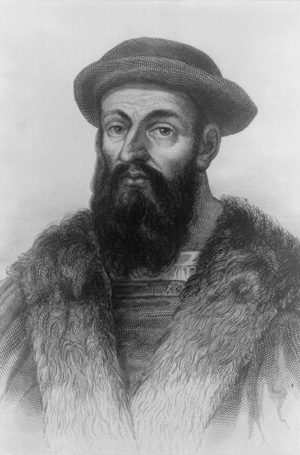 Portuguese explorer Ferdinand Magellan (c. 1480 – 1521) organized and captained the first sailing expedition that circumnavigated the globe, though he died before completing the journey.

Magellan left Spain in 1519 with five ships a on fourteen month journey that would take his sailors more than 12,000 miles around the world. 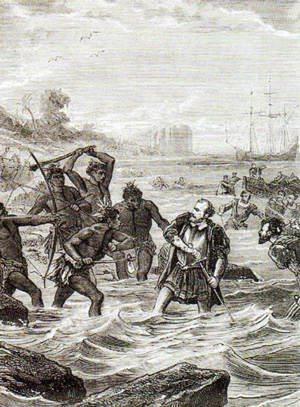 Eighteen of Magellan’s sailors made the journey around the world, but the captain was killed in a battle in the Philippines in 1521.