Though he never held office, many Indian people consider Mohandas Gandhi to be the father of their country. The British had controlled the Indian subcontinent for more than a century by the 1940s, but Gandhi led his followers in non-violent protests that forced the British to turn over power to the Indian people.

“There are many causes I would die for,” Gandhi once said, “but there is not cause that I am willing to kill for.” In the United States, Martin Luther King used Gandhi’s example to demand better treatment for African-Americans in the Civil Rights Movement of the 1960s.

As a young man in 1888, Gandhi spent three years in Great Britain’s capital city—London—studying law. Gandhi purchased new clothes and practiced speaking English without his Indian accent to fit London society. After a few months, Gandhi realized he was pretending to be someone he wasn’t.  So instead of learning how to be British, Gandhi began to study his own Indian culture while living in London.

Gandhi took a job in South Africa, which, like India, was part of the British Empire. Shortly after his arrival, Gandhi bought a train ticket in the first-class section. A policeman told Gandhi to move to the third-class section because all Indians in South Africa had to travel with the poorest travelers. When Gandhi protested that he paid for a seat in first class, the policeman removed him from the train. Gandhi considered that incident his moment of truth.

Gandhi learned that South Africa’s Indian minorities lived in terrible conditions and regularly faced discrimination. He spent the next twenty years championing the rights of the Indian minorities in South Africa. Within a few years, Gandhi’s became well known as newspapers around the world covered his activism.

In 1904, Gandhi established a commune in South Africa. A commune is a group of people living together and sharing possessions and responsibilities with all members livings as equals. He encouraged the people who lived there to ignore class differences, particularly the caste system, a rigid social structure that discriminated against many Indian people.

After twenty years of speaking out for the Indian people in South Africa, Gandhi returned to India a national hero. Instead of using his fame to make changes in Indian society, Gandhi spent a year traveling the Indian countryside, dressed only in a loincloth and sandals—the clothing of India’s poorest people. Gandhi began to advocate for the untouchables, a group of Indian people who had faced centuries of discrimination from their fellow Indians. Gandhi called them Harijan, a term that means “children of god.” The Harijan, said Gandhi, had been blessed by their suffering.

Gandhi became a leader of a growing movement of Indians who wanted independence from Britain. He urged the Indian perople to boycott—refuse to purchase—British goods. Gandhi argued that the Indian people were supplying Britain with the raw materials for clothing, then purchasing expensively woven cloth from British merchants. So Gandhi wore clothes made from yarn he spun himself to demonstrate that the Indian people could be self-reliant. 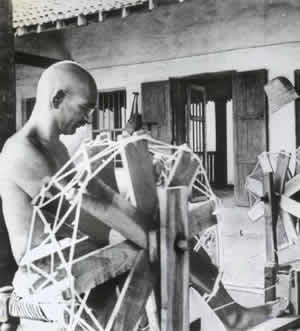 Gandhi devoted two hours every day to spinning yarn, and urged other Indians to follow his example. As a result of Gandhi’s spinning program and the boycott, the sale of British cloth in India dropped sharply.

Gandhi devoted two hours every day to spinning yarn, and urged other Indians to follow his example. As a result of Gandhi’s spinning program and the boycott, the sale of British cloth in India dropped sharply. As his popularity in India grew, many people began to call Gandhi the Mahatma, or “great soul.”

Gandhi and his followers opposed British control of India through civil disobedience and non-violent protest. In 1919, Gandhi organized a strike of Indian workers against the British. Many Indian people sat down in factories or the middle of streets. Women would lie across railroad tracks to stop trains. When British authorities used violence to end the strike, Gandhi cautioned his followers remain peaceful. Gandhi was jailed several times during this period. He told his followers, “We will not strike a blow — but we will receive them. And through our pain we will make them see their injustice . . . because they may torture my body, they may break my bones or even kill me. Then they will then have my dead body, but they will never have my obedience.”

After World War II ended in 1945, India’s independence campaign finally paid off. Although the British were victorious, the war destroyed their economy. The British decided the cost of maintaining colonial rule in on the unwilling subcontinent was too high, so they began to turn over power to the Indian people.

India is a land of many languages and cultures, but most Indian people are either Hindu or Muslim. The Indian people had put aside their religious differences to fight the British, but with victory in sight, problems began resurfacing between the two religious groups. As independence neared, the struggle between Hindus and Muslims became violent.

British and Indian leaders concluded that the only solution to the conflict between Hindus and Muslims was a partition that separated the continent into Hindu and Muslim states.

In 1947, the Indian subcontinent was divided into the independent nations of India and Pakistan. Pakistan was composed of two regions: West Pakistan on the Indus River plain, and East Pakistan (now Bangladesh), more than 1,100 miles away. Important parts of what were once considered India, including the Indus River for which the subcontinent is named, became part of Pakistan after the partition.

Twelve million people were forced to move—Hindus to India, Muslims to Pakistan—in one of the greatest migrations of refugees in history. Both groups moved because they feared being ruled by leaders of the other faith. Their journeys were often long and torturous. Many people were forced to leave their possessions or trade them for food and water. Hunger, thirst and exhaustion killed others. Additionally, an estimated one million people were killed in religious warfare.

Gandhi was born a Hindu, but he considered the separation of his homeland one of the greatest disappointments of his life. Some people on both sides blamed him for the fighting. When he was unable to prevent the conflicts by persuasion, he went on a fast. He refused to eat until the fighting ended. Gandhi’s fast stopped rioting in Calcutta and Delhi. A few days after ending his fast on January 30, 1948, a young Hindu fanatic murdered Gandhi as the Mahatma was on his way to a prayer meeting in Delhi.

Gandhi died believing that he had failed because he was unable to unite the subcontinent, but he inspired people around the world. Today Gandhi is revered as a hero in India and around the world as a man who used non-violence to lead his people to freedom. 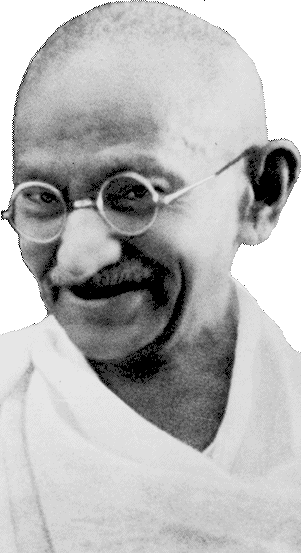 The Wisdom of the Mahatma

Gandhi’s words have inspired people around the world. Here is a selection of his quotes:

“You must be the change you wish to see in the world.”

“Even if you are a minority of one, the truth is the truth.”

“Nobody can hurt me without my permission.”

“Peace is its own reward.”

“A man is but the product of his thoughts what he thinks, he becomes.”

“The weak can never forgive. Forgiveness is the attribute of the strong.”

“The best way to find yourself is to lose yourself in the service of others.”

“Honest disagreement is often a good sign of progress.”

“An eye for an eye only ends up making the whole world blind.”

“A coward is incapable of exhibiting love; it is the prerogative of the brave.”

“There is more to life than increasing its speed.”

“Anger and intolerance are the enemies of correct understanding.”v

“Satisfaction lies in the effort, not in the attainment, full effort is full victory.”

“Poverty is the worst form of violence.”

“Non-violence is the greatest force at the disposal of mankind. It is mightier than the mightiest weapon of destruction devised by the ingenuity of man.”

“Man becomes great exactly in the degree in which he works for the welfare of his fellow-men.”

“I object to violence because when it appears to do good, the good is only temporary; the evil it does is permanent.”

“A ‘No’ uttered from the deepest conviction is better than a ‘Yes’ merely uttered to please, or worse, to avoid trouble.”

“Happiness is when what you think, what you say, and what you do are in harmony.” 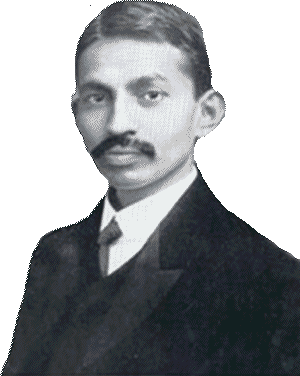 Gandhi photographed as a young lawyer. While studied law in London for three years, Gandhi attempted to become a “perfect English gentleman.” He purchased English suits and took violin and dancing lessons until he realized that he was not comfortable with the western lifestyle. Despite Gandhi’s attempt to adopt western customs, he kept a vow to his mother to abstain from meat and alcohol while he was away from home.