Aksum (also spelled Axum) is today a rural and easily overlooked town in northern Ethiopia, but for more than six hundred years, Aksum was a center of trade and the site where Christianity was first introduced to sub-Saharan Africa. Aksum’s wealth was derived from its location on the Red Sea, which allowed the Aksumites to exchange spices, ivory, ebony and animal shells with Egypt, Greece, Rome and lands as far away as Persia and India. Foreign ships introduced textiles, precious metal objects, wine and olive oil to East Africa through the ports in the Aksumite kingdom. Gold and silver coins minted in Aksum circulated in Africa, Asia and Europe from about 270CE to the empire’s decline in the seventh century. The coins spread the message of Aksum’s wealth. Modern historians are able to use the coins to provide a reliable history of the Aksumite Empire. Aksumite kings used their wealth to build impressive palaces and granite monuments. 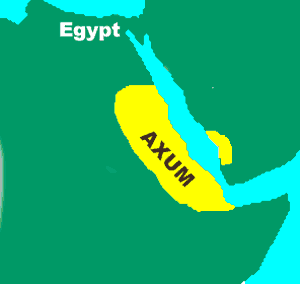 The Kingdom of Aksum or Axum was a trading nation in the area of northern Ethiopia and Eritrea from approximately 100–940CE.

Local legends describe how two shipwrecked brothers brought Christianity to Aksum in the fourth century. Frumentius and Aedesius were aboard a ship that stopped to rest in Aksum during a voyage. Local tribes people massacred everyone onboard the ship except for the two brothers, who were taken as slaves to the Aksumite king and queen. When the king died, Frumentius and Aedesius gained the favor of the queen. She asked the brothers to tutor her son, Ezana, and to assist her in running the empire. The brothers encouraged traveling Christian merchants to share their faith, and in time, the boy they tutored became king. King Ezana established the Ethiopian Orthodox Church in the fourth century. Islam became the dominant religion in the Middle East and North Africa beginning in the seventh century, but more than forty million people in Ethiopia continue to practice Christianity today.

The Aksumite Empire began a slow decline in the seventh century of the Common Era. Aksum remained a Christian stronghold while Islam spread throughout the Middle East and North Africa. Muslim traders often found it easier to exchange goods with cultures that shared their faith. In addition, over farming exhausted the land, forcing many Axumites to move further inland to grow crops. A changing climate caused the land to become warmer and drier. Also, the flood pattern of the Nile changed after the seventh century. These factors led cultures in the region to bypass Aksum to trade with one another directly.

The 79-foot tall Obelisk of Aksum

The 79-foot tall Obelisk of Axum now in Ethiopia. The people of the ancient Kingdom of Axum probably erected the pillar during the 4th century of the Common Era Italy invaded and occupied Ethiopia from 1935 to 1941. In 1935, Italian soldiers found the obelisk had collapsed and broken into five pieces. Two years later, it was taken and moved to Italy, which hoped to use the pillar as a symbol of the birth of the “new Roman Empire.” Seventy years later, the Italian government returned the obelisk at the cost of $7.7 million. The monument was re-erected in its original home and unveiled in 2008.