Prince Henry the Navigator seldom left his home in Portugal, but he helped make it possible for the first Europeans to explore Africa. In Henry’s time, the ocean was very dangerous, and Africa was a mysterious place that seemed to contain endless miles of sand. Today we know this sand as the Sahara Desert. Although it isn’t endless, the Sahara is the largest desert in the world, and its expanse isolated many sophisticated cultures south of the deserts from the rest of the world.

Henry wanted to find a water route to India. The passage to India over land was long, slow, and dangerous. A ship could carry more goods to and from India than the largest caravans, but Europeans could only guess that sailors could circumnavigate, or go around, Africa.

Prince Henry helped unlock the secrets of Africa. Henry set up a school for sailors to learn the secrets of the ocean. He paid for many sailing expeditions out of the Portuguese treasury. Henry also employed cartographers who created the most sophisticated maps of their time. The maps made it possible for sailors to learn from previous expeditions.

Henry was a visionary. A visionary is someone who can imagine something that hasn’t yet happened. Henry owned a globe when many people thought the world was flat. Though the region had not been explored by Europeans, Henry believed that Africa was not infinite and that if his sailors could circumnavigate the continent; he would find a water route to India.

When Henry died in 1460, his sailors had only reached as far as the Canary Islands in West Africa. Twenty-eight years later, Bartholomeu Dias proved that it was possible to circumnavigate Africa when he reached the southern tip of the continent, now known as the “Cape of Good Hope.” In 1499, Vasco da Gama was the first sailor to travel from Portugal to India. Just a few years earlier, Queen Isabella of Spain hired a sailor from Genoa to reach India by sailing west. It wasn’t until years later that anyone understood that the “Indians” he encountered weren’t from India after all. 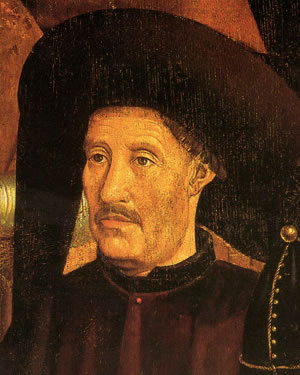 Henry the Navigator (1394 – 1460), better known was the fifth child of the Portuguese King John I and responsible for the early development of Portuguese exploration and maritime trade. 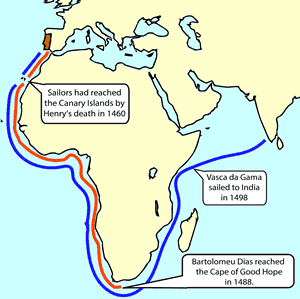