A Powder Keg in Europe

A Powder Keg in Europe

Europe dissolved into many cultures at the end of the Roman Empire. Several smaller empires emerged, but none matched the power and glory of Rome. By the turn of the twentieth-century, most of the smaller states of Europe combined or were conquered into larger nation-states. Germany and Italy became unified nations in the latter part of the nineteenth century. They joined Great Britain, France, Austria-Hungary, and Russia as European world powers. These nations were filled with nationalism or great national pride. These European nations expanded their borders by building imperial colonies in Africa and Asia. Most Europeans believed their nation to be superior to every other nation, and many Europeans were willing to go to war to demonstrate their will.

Europe had been at peace for many years by the spring of 1914. There had not been a multinational war since Napoleon’s defeat 99 years earlier. Germany, France, and Russia fought minor wars, but they were of little consequence. Ethnic minorities chafed in Austria-Hungary, the final remnant of the Holy Roman Empire, but in 1914, it was reasonable to assume that Europe would remain at peace for many years. That assumption would turn out to be false.

Europe in 1914 has often been compared to a powder keg: safe and secure until a fuse is lit. That summer, the assassination of an Austrian noble resulted in “the Great War,” the most destructive conflict then known to humankind.

The city of Sarajevo is at the foot of the Balkan Mountains. Sarajevo was a city of great unrest in because Austria-Hungary had seized the city and the surrounding region in five years earlier. On June 28, Archduke Francis Ferdinand and his wife visited the city. Ferdinand was the heir, or next in line to be emperor of Austria-Hungary. There were rumors of an assassination attempt by ethnic Serbians in Sarajevo, but the Archduke and his wife wandered through the city believing they were safe. A group called the Black Hand proved otherwise.

The Black Hand was an ethnic Serbian terrorist organization composed mainly of teenagers. Several Black Hand members were in Sarajevo with orders to kill the Archduke. That morning, the Archduke and his wife narrowly missed death when a terrorist attempted to throw a bomb into the their car. The driver sped up, causing the bomb to bounce off the Archduke’s arm land behind the car. The next car in the procession was destroyed and several people were injured.

After the Archduke gave a speech, he decided to go to the hospital to visit the people wounded in the attack. The Archduke’s driver was unfamiliar with the route and took a wrong turn. The car slowed to a halt in front of a café, where Gavrilo Princip sat sipping coffee only five feet away. Princip was a Black Hand terrorist who thought the opportunity to kill the Archduke had passed. Suddenly and by coincidence, Princip was presented with another chance. The young Serbian shot three times, killing the Archduke and the Archduke’s wife.

Gavrilo Princip set events in motion that would lead to worldwide conflict. Princip died in prison, but he was a hero to many Serbian people. The store in front of the site where the Archduke was killed became a museum that honored Princip.

The museum closed in 1992 because ethnic violence made it a target of snipers. The cultural tensions that led to World War I was still a factor in the Balkan region almost eighty years later. 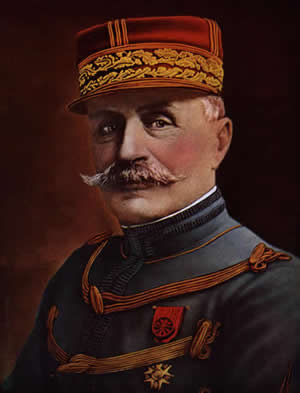 Archduke Franz Ferdinand (1863 – 1914) was heir apparent to the Austro-Hungarian throne. His assassination in Sarajevo precipitated World War I. 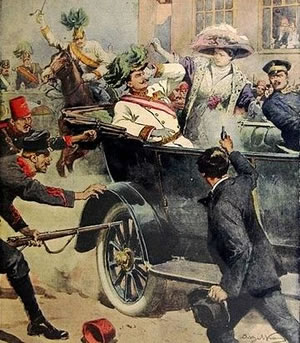 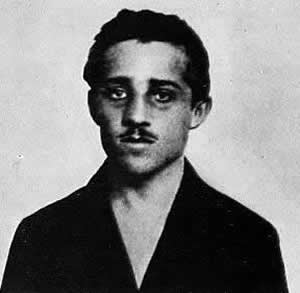 Gavrilo Princip (1894 – 1918) was a nineteen year old Bosnian Serb who assassinated Archduke Franz Ferdinand of Austria and his wife, Sophie in Sarajevo in 1914. Princip was twenty-seven days too young to be executed for his crime. He died in prison three years later.