When the Nazi party took control of Germany, people who did not fit Adolf Hitler’s view of the perfect Aryan German race faced extermination. Targets included Jews, Slavs, the Roma (Gypsy) people, homosexuals, the mentally handicapped, and others.

On November 9, 1938, the world got its first glimpse of the terror that lay ahead for Jews in Germany. German gangs attacked and burned synagogues and Jewish business throughout Germany. Jewish hospitals, homes, schools and cemeteries were also vandalized. The night became known as Kristallnacht, or the “night of the broken glass.” Some 30,000 Jews were arrested and placed in prisons called concentration camps.

The Nazis used the concentration camps for many atrocities. Camp prisoners were used as slave laborers and were often worked to death. The Nazis conducted cruel medical experiments without using anesthesia. 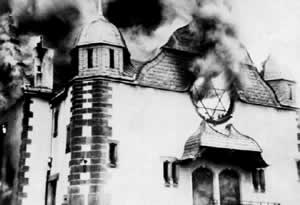 A Jewish synagogue set on fire in Nazi Germany

In time, the Nazis adopted a policy of genocide, the deliberate and systematic extermination of a group of people based on their race, religion, or culture. The concentration camps became death camps with gas chambers for mass killings. Many prisoners were forced to dig their own graves. Once the graves were dug, the prisoners were shot. Those who survived the shooting were buried alive. Other prisoners were starved to death or died from lack of medical care. One of the cruelest atrocities involved “showers.” Naked men, women, and children were herded into a large room expecting to be showered with water. Instead, poison gas filled the room, causing a cruel, painful death. The bodies were then removed and cremated.

Altogether, as many as six million Jews and five million others perished in what became known as the Holocaust. After the war, the Allied Powers convicted the Nazi leaders for “crimes against humanity,” for their atrocities. The few survivors of the Holocaust have implored the world to never let the world forget the tragedy for the Jewish people, or for any people. More than half a century after the Holocaust, institutions, memorials, and museums continue to teach the history of the Holocaust to future generations. 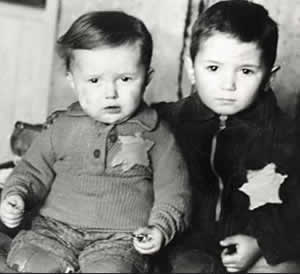 The German government first introduced mandatory badges in Poland in November 1939. Jews who failed to wear them risked death. 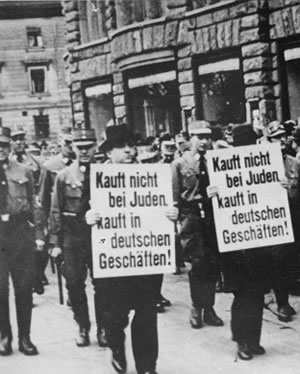 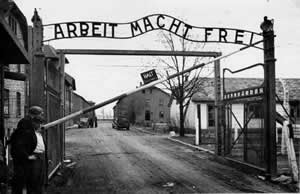 The gate leading to the Auschwitz concentration camp in what is now Oświęcim, Poland. “Arbeit macht frei” is a German phrase meaning “work makes you free.” The Nazis placed the slogan over the entrances to a number of Nazi concentration camps during World War II.