The Allied forces emerged victorious from the war by the end of the summer of 1945, but at a horrible price. More than fifty million people lost their lives. The world lost not just the soldiers, but it also lost the contributions they would have made later in their lives.

Europe had been devastated by the war. Allied and Axis bombs had laid waste to large portions of the continent. All that remained in many cities were the burned out shells of what were once buildings.

Two military “superpower” nations emerged from the rubble: the United States and the Soviet Union. The Soviets used the end of the war as an opportunity to expand their empire. Britain, France, and America briefly occupied the conquered nations, and then gradually allowed them to return to self-rule. The Soviets imposed totalitarian governments throughout the land they occupied in Eastern Europe.

An uneasy “Cold War” followed as the United States and the Soviet Union, competed for supremacy. Both nations stockpiled enough arms to guarantee the destruction of one another. This policy was known as “Mutually Assured Destruction,” and while costly and terrifying, it worked. Neither nation used their deadly arsenal, but both nations funded smaller wars to advance their interests. The Cold War ended with the breakup of the Soviet Union in 1991.

Immediately after the Second World War, the United States feared that the Soviets would impose their totalitarian style of government on the ruined European nations. The United States decided that rebuilding Europe would prevent Soviet expansion. The Marshall Plan provided more than $35 billion in aid to Europe after the war.

Representatives of 51 nations met in San Francisco in August 1945. They formed the United Nations, an international body that would resolve disputes through diplomacy rather than armed conflict. Today more than 180 nations belong to the United Nations. The United Nations has made many contributions to world peace but has not prevented war.

Almost all European Jews perished in the Holocaust. The few remaining Holocaust survivors did not want to return to the countries that participated in their destruction. Anti-Semitic sentiment still existed in many European nations even after the terrible war had ended. Some found it was still not safe to return to their homes.

Many Jews wished to return to their traditional homeland on the eastern shore of the Mediterranean Sea. The British controlled the land, but it was occupied mainly by Arab Muslims. The Arabs were upset with Jewish immigrants on what they felt was their land. The United Nations declared Israel an independent Jewish homeland in 1948. After more than two thousand years, the Jewish people finally had a nation of their own, but they would remain in conflict with its neighbors to this day. 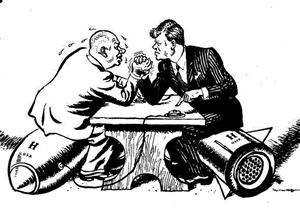 Soviet Union Premier of the United States are depicted in this Cold War era political cartoon. Notice that both men are sitting on missiles and have their fingers close to the detonation button that would lead to nuclear war.

The end of World War II, led to a “Cold War” between the United States and the Soviet Union as the two superpower nations attempted to influence the developing nations of the world. 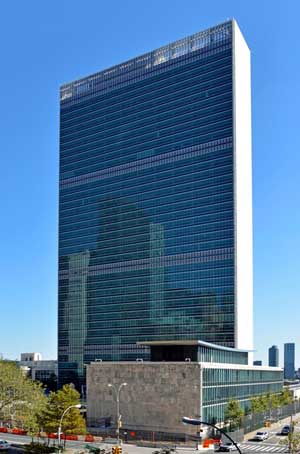 The headquarters of the United Nations in New York City. Fifty-one nations formed this organization to resolve disputes through diplomacy rather than armed conflict. Today more than 180 nations belong to the United Nations. The United Nations has made many contributions to world peace, but has not prevented war