Allied Victory in World War I

Allied Victory in World War I

Over the course of many years, the nations supporting the soldiers at the front lost their will to continue the war. Russia was the first to leave, but the rest of the Allies remained. The Central Powers left the fighting one by one, leaving only Germany to fight the Allies.

Bulgaria left the war, followed by the Ottoman Empire. The Turks were forced to accept terms that whittled their empire to approximately the borders of modern Turkey. The British took possession of Mesopotamia. Mustafa Kemal became the leader of Turkey. Kemal urged his people to modernize in order to strengthen his nation and keep any foreign powers from attacking in the future. In 1934, the Turkish assembly gave Mustafa Kemal the name Ataturk, or “Father of the Turks.”

The various ethnic groups within Austria-Hungary forced the empire to crumble. Many minorities deserted the Austro-Hungarian army and joined the Allied forces. By 1918, independence movements formed in Czechoslovakia, Poland, Yugoslavia, and Romania. Hungary left the empire at the end of the summer, followed by Austria. When the imperial government surrendered to the Allies, the empire no longer existed. 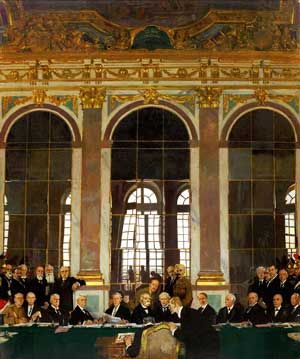 Representatives of Germany and the Allied Forces signed the Peace Treaty that ended the Great War in the Hall of Mirrors at the Palace of Versailles near Paris, France.

Germany was left alone to fight the Allies, but the weary German people had lost their strength. Strikes and civil disorder were common by 1918. Germany no longer had the industrial capability or the money to continue fighting. After months of negotiations, Germany and the Allied Forces agreed to end the fighting. On the eleventh hour of the eleventh day of the eleventh month of 1918, the fighting ended and the Western Front was quiet for the first time in more than four years.

Newspaper announces the end of the Great War

The Treaty of Versailles

On June 28, 1919, representatives of the Allied Powers and Germany signed the Treaty of Versailles, ending World War I. The agreement was signed precisely five years after the assassination of Archduke Franz Ferdinand.

The treaty stripped Germany of 25,000 square miles and more than seven million people. The pact also limited Germany’s military and forced them to pay for the cost of the war. The economic burdens of the treaty kept Germany in poverty and was a factor in the rise of Adolf Hitler.