Ancient calendars were generally based on the beginning of a ruler’s reign.  For example, a certain year would be identified as the third year of Hammurabi’s rule.

Most people today use the Western calendar (also known as the Gregorian calendar) for everyday purposes. About 525, a Christian monk named Dionysius Exiguus marked the year Christ was born as 1. The Western calendar tells us we live in 2019, which is sometimes written AD2018. AD refers to anno Domini, a Latin phrase that means “the year of the Lord.”

Most people use the Western Calendar today, but other calendars are used for cultural and religious purposes.  The Islamic calendar is based on the cycle of the moon, so it is ten or eleven days shorter than the Western calendar.  The first year of the Islamic calendar is the year the prophet Muhammad and his followers migrated from Mecca to Medina.  On a Western calendar, this is AD622.  Most of 2018 is part of the Islamic year AH1439.   BCE is a Latin phrase that can be translated as “the year of the journey.”  The Hebrew calendar is used for Jewish religious services.  The Hebrew year 5779 begins at sunset on September 9, 2018.  Years are marked AM on the Hebrew calendar for a Latin phrase that means “the beginning of the world.”  The Chinese calendar is used for festivals and holidays in many East Asian nations.  On the Chinese calendar, most of 2018 is known as the Year of the Dog. The Year of the Pig will begin February 5, 2019.

We also use terms such as era or epoch to describe periods of time. A geologist is someone who studies how the earth has changed.  For a geologist, an era might last millions of years. For our purposes, an era will be any significant period of time. For example, you are in the middle school era of your life.  You may see photographs of people wearing different styles of clothing that reflect the era when the pictures were taken. An epoch is a particular moment that marks the beginning or the end of an era.  Your thirteenth birthday is the epoch that begins your teenage years. 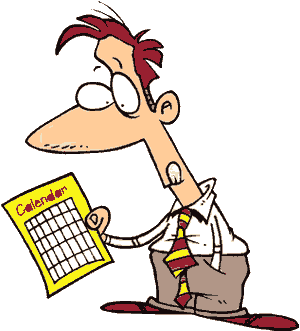 Dionysius Exiguus lived in the sixth century of the Common Era. His name can be translated as Dennis the Humble; though a writer described Dionysius as “the most learned” scholar in the city of Rome, Dionysius lived a simple life as a Christian monk.  A monk is a religious person who resides apart from the rest of society in a life of prayer or study.

About AD525, Pope John I asked Dionysius to calculate a table of the future dates of Easter. Easter is an important Christian holiday that occurs at different times during the spring based on the cycle of the moon. At that time, many Romans numbered years from the reign of Emperor Diocletian. Diocletian instigated the persecution of Christians, so Dionysius dated his table from the birth of Jesus Christ.

Dionysius calculated that Christ was born 525 years before his time, so the monk identified the year he wrote the table as anno Domini 525, which translates to the year of the Lord 525. Later scholars studied the Christian Bible and concluded that Jesus was likely born between four and six years earlier than Dionysius’ calculation.

Previous: Civilizations and Water - Waterfront Living Next: From Nomads to Farmers