The Hebrews were the ancestors of the Jews. They lived on the eastern shore of the Mediterranean Sea until AD70, when the Roman army forced the Jews to leave. For almost the next two thousand years, the Jews lived as minorities in different lands. Through the centuries, they were often unwelcome guests in their new countries.

The Jews faced pogroms, or organized massacres, particularly in Russia and Eastern Europe. In the late 1890s, writer Theodor Herzl formulated the ideas of Zionism. Zionists felt that the only way Jews could be safe would be to recreate a Jewish state. The ancient homeland of the Jews was at that time known as Palestine and was populated by Arab-speaking people.

The British took control of Palestine after the collapse of the Ottoman Empire at the end of World War I. By this time, many Jews had settled on land their ancestors called home. Violence broke out between the Jewish settlers and the local Arab-speaking people known as Palestinians.

At the end of World War II in 1945, representatives of fifty countries formed the United Nations to “save succeeding generations from the scourge of war.” In 1948, the United Nations created the modern state of Israel as a homeland for Jews. Five Arab states immediately invaded Israel. The Jews fought back and extended the borders of their new nation. After another war in 1967, Israel occupied formerly Arab lands along the West Bank of the Jordan River, near the city of Gaza, and the Sinai Peninsula.

In 1977, Egyptian President Anwar Sadat became the first Arab leader to agree to a peace treaty with Israel. Israel returned the Sinai Peninsula to Egypt and the long dispute between the nations ended. Many Arabs saw Sadat as a traitor for making an agreement with Israel. Five years later, Sadat was assassinated by Egyptians who did not believe he should have agreed to peace with Israel.

Map of the modern nation of Israel 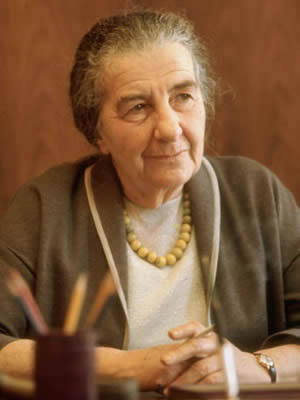 Golda Meir was the first woman to be elected Prime Minister of Israel in 1969. Prior to moving to Israel, Mrs. Meir was a public school teacher in Milwaukee, Wisconsin. 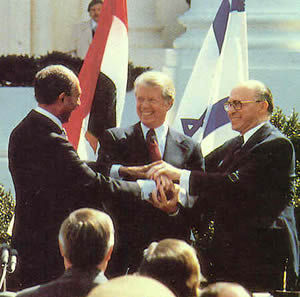