The Dead Sea is not a sea, but a 50-mile long by 11-mile wide salt lake between Israel and Jordan. We call it a sea because it is salty like a sea or the ocean.

People can easily float on the surface of Dead Sea because it more than eight times saltier than the ocean. When swimmers get out of the water, they often have a salty crust left on their skin. Any fish carried in from the Jordan River die instantly when they reach the Dead Sea.

Other salty lakes exist in dry areas around the world. The Caspian Sea in western Asia is the world’s largest lake. The Romans thought they had reached the ocean upon finding the Caspian because it was salty. Utah’s Great Salt Lake and the Aral Sea in Central Asia are also salty lakes. 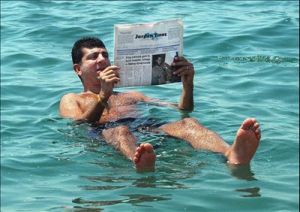 People can easily float on the surface of Dead Sea because it more than eight times saltier than the ocean.

Water from the Jordan River flows into the Dead Sea, but the hot desert sun evaporates the water about as fast as it flows in from the river.