Bedouins are nomadic people who inhabit the Middle East and North Africa. Bedouin is an Arabic word that means “desert dweller.” Like the plants and animals, the Bedouin have adapted their lifestyle to the severe desert climate. They use their extensive knowledge of the location of water and seasonal weather changes to survive.

Traditionally, the Bedouin prefer to herd animals such as camels, sheep, and goats. They generally travel in extended family units called goums. A goam is headed by a sheik, a position handed down from father to eldest son. Many Bedouins live in tents. The tents allow the Bedouins to move easily. Almost all of the Bedouins are Muslims who speak Arabic.

Severe droughts in the region have forced many Bedouins to give up herding and take traditional jobs. The oil wealth of many nations of the Middle East and North Africa has provided economic opportunities for the Bedouin. The wealth derived from oil provides social services that would not be available to people living a nomadic lifestyle. It is estimated that about 2.5 million people continue to practice the traditional Bedouin lifestyle, but the population of people following the traditional Bedouin lifestyle continues to dwindle as they are offered better opportunities. 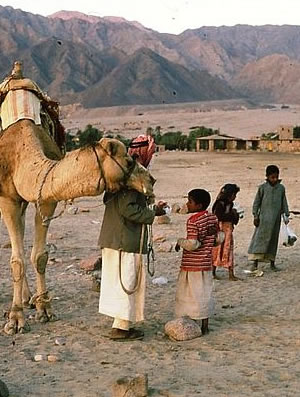 Like the plants and animals, the Bedouin have adapted their lifestyle to the severe desert climate. 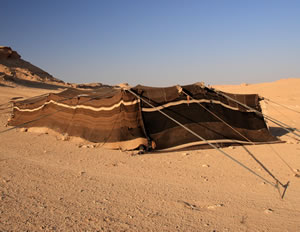 Many Bedouins live in tents. The tents allow the Bedouins to move easily.