The Middle East and North Africa: Many Things in Common - Mr. Dowling.com

The Middle East and North Africa: Many Things in Common

The Middle East and North Africa: Many Things In Common

Most Iranians speak a Persian language called Farsi. Until 1935, Iran was known as Persia, a culture that has existed for thousands of years.
advertisement


Most people in Turkey are Muslims but speak Turkish rather than Arabic. The Turks originally came from the land northwest of India.
Lebanon includes a significant Christian minority. Lebanon once had a Christian majority, but Muslims now outnumber Christians because Muslims have tended to have more children. Until recently, most Arabs living in the United States have been Lebanese.
Most people in Israel speak Hebrew and practice Judaism. After World War II ended, the United Nations created Israel as a homeland for Jews.
About twenty-five million Kurds live in the mountains between Iran, Iraq, Syria, and Turkey. The Kurds are Muslims, but they have the own language and culture. Many Kurds want to keep their traditional lifestyle and resist assimilating into the population of their host nations.
A minority of the people of Morocco and Algeria speak Berber languages. The Berbers are the descendants of the people who lived in North Africa before the Arab invasion. The Berber language and traditions are more common in the isolated places of North Africa such as mountains and deserts. Most Berbers today are Arabic-speaking Muslims.
Many of the nations of the Middle East and North Africa were once controlled by European nations. As a result, English, French and Italian are often spoken in the region.

Download this lesson as Microsoft Word file or as an Adobe Acrobat file.
Listen as Mr. Dowling reads this lesson.
Mr. Donn has an excellent website that includes a section on the Middle East and North Africa.

Where is the Middle East?

The lands around the southern and eastern shore of the Mediterranean Sea are often called the Middle East or the Near East. The term came from the first geographers in ancient Greece, for whom the region was both near and east. China and Japan are part of the Far East.

The west originally referred to Western Europe, but later included the American continents once they were discovered. Australia and New Zealand are often considered western nations. This is because most people in those nations have more in common with people in Western Europe and America than they do with China or Japan. 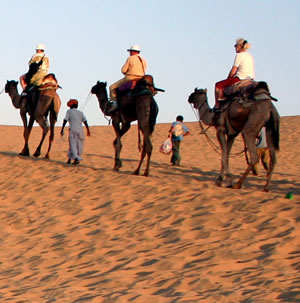