For thousands of years, the Nile River overflowed its banks every spring as snow and spring rains in the mountains of East Africa transformed into a torrent of water. The annual flooding carried dead and decaying plants in its muddy solution. The muddy water is called silt, and silt created excellent topsoil for Egyptian farmers.

For more than a century, Egyptian leaders have dreamed of building a dam to control the Nile River. In addition to regulating the Nile’s flow, a large dam could store water for Egypt’s dry season, and rushing waters flowing from the dam could provide Egypt with a free supply of hydroelectricity. Hydroelectricity is electric power generated by the movement of water.

The British built a dam in the city of Aswan in southern Egypt in 1902. What is now called the Aswan Low Dam or the Old Aswan Dam was, at that time, the largest masonry dam in the world. Despite its size, the original Aswan Dam was unable to provide Egypt with proper control of the great river. Further, the original dam did not hold back a large reservoir of water for use in the dry season.

Egyptian President Gamal Abdel Nasser hoped to build a larger dam. In 1956, Nasser asked the United States and Great Britain for financial assistance. The western nations refused because of Nasser’s close ties with the Soviet Union. The Soviet Union, now known as Russia, was at that time a military superpower nation. The United States and Britain were engaged in a period of hostilities with the Soviet Union. These hostilities were known as the Cold War. The Cold War lasted from 1945 until 1990. Although the hostilities did not develop into World War III, both sides sought to influence developing nations such as Egypt. When the two western nations refused Nasser’s request for financial assistance, the Egyptian president seized control of the Suez Canal. He then asked for and received assistance from the Soviet Union to build a larger dam in Aswan.

The Aswan High Dam was completed in 1970. The new dam was able to control the annual flooding of the Nile, but it created both benefits and consequences for the Egyptian people. By holding back water, the Aswan Dam created Lake Nasser, the world’s largest man-made lake. The water from Lake Nasser provided new fishing areas. The Aswan Dam also makes it possible for Egyptian farmers to grow an extra crop each year by releasing water into the Nile during the dry season. The dam has also helped tourism in Egypt because the height of the Nile is now reliable enough for cruise ships to travel the ancient river’s waters throughout most of the year.

Critics charged that building the Aswan Dam was unwise. The project was far more expensive than originally expected. Further, since the creation of the Aswan Dam, the farmers along the banks of the Nile River have had to use expensive fertilizers in place of the topsoil provided by the river silt. Fish had once fed on the silt, and the people downstream depended on fishing from the river. Without the food in the muddy water, fewer fish are able to survive. The human impact of the Aswan High Dam was also great. More than 100,000 Egyptian people and an additional 50,000 Sudanese people were forced to move because their homes would soon be under the water held back by the Aswan High Dam.

The Aswan High Dam was a tremendous technological achievement, but building the dam was a controversial decision that has been debated for more than fifty years. 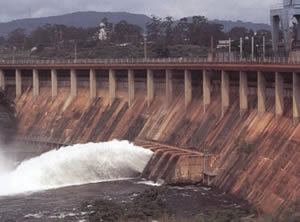 The Aswan Dam in southern Egypt holds back water from the Nile River.