The War on Terror

The War on Terror

The terrorist attacks of September 11, 2001 were a stark reminder of how vulnerable the world was to terrorist acts. The Global War on Terror was a campaign by the United States and its allies to prevent international terrorism.

America’s most notable foe in the war on terror has been Al Queda, a violent organization that seeks to end western influence in Muslim countries. Al Queda’s terrorist operations have been funded largely by Osama bin Laden, a member of a wealthy construction family. Bin Ladin was the subject of a $25 million reward offered by the American State Department before he was killed by American forces in Pakistan in 2011.

Saddam Hussein led Iraq from 1979 until his removal from power in 2003. In 1980, Saddam began a bloody war with Iran, hoping to seize control of oil-rich land. Iran and Iraq fought for nine years, and as many as one million people died, but the war ended without either side able to claim victory.

The war with Iran left Iraq with huge debts. Saddam needed funds to maintain his army, which he used to control the Iraqi people. In 1990, he decided to invade the tiny oil-rich nation of Kuwait. A multinational military force, led by the United States, responded to the invasion and liberated Kuwait in January 1991.

As part of the peace settlement after what became known as the Gulf War, Saddam agreed to allow inspectors to ensure that he was not building weapons of mass destruction. Saddam was already responsible for the deaths of millions in the Iran-Iraq war, and if he had access to nuclear weapons, the results may have been disastrous for the entire world. In a speech to the American people in 2002, President George W. Bush stated that it was his goal “to prevent regimes (governments) that sponsor terror from threatening America or our friends and allies with weapons of mass destruction.” When Saddam refused to allow weapons inspectors into Iraq, the United States Congress gave President Bush the authority to invade.

The United States its allies forced Saddam from power in 2003. The dictator was later captured and put on trial by the newly elected government of Iraq for “crimes against humanity.” He was found guilty and executed in 2006. Weapons inspectors later determined that Saddam Hussein did not have weapons of mass destruction in Iraq.

The United States began to draw down forces in Iraq and Afghanistan in the early 2010s. In 2013, President Barack Obama said, “Our systematic effort to dismantle terrorist organizations must continue, but this war, like all wars, must end. That’s what history advises. It’s what our democracy demands.” 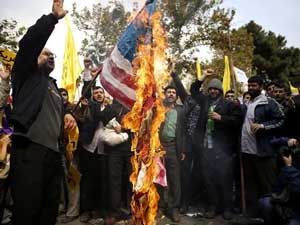 Iranian students burn the American flag during the Iranian Revolution in 1980. 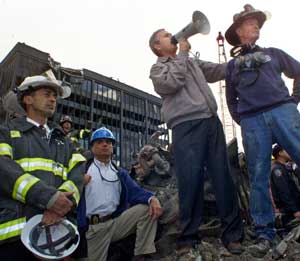 Three days after the terrorist attacks of September 11, 2001, President George W. Bush spoke to the people assembled at the wreckage of the World Trade Center. President Bush said, “I want you all to know that America today is on bended knee in prayer for the people whose lives were lost here, for the workers who work here, for the families who mourn.” 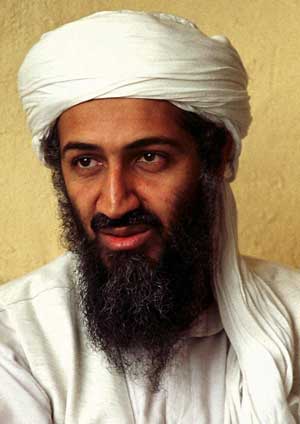 Osama bin Laden (1957 – 2011) was the founder of al-Qaeda, the terrorist organization that claimed responsibility for the September 11 attacks on the United States.