Attila and the Huns

Ferocious, uncivilized and unpredictable, the Huns were nomadic warriors who terrorized Europe for a generation in the fifth century. Then, after the death of their brutal but charismatic leader, Attila, the Huns disappeared from the pages of history.

The Romans saw the Huns as half-animals; they spoke a language of grunts and had a taste for raw meat. The Huns had no interest in farming, building, or trade. They had no writing or any interest in governing. Their talent lay in attacking and plundering settled people, using fear as their primary weapon.


The Huns were pastoralists, which means they tended to animals. Throughout history, pastoralists have generally been more warlike than farmers. With no permanent home, the Huns had no interest in settling on the lands they raided. Skilled horsemen, the Huns were known to attack quickly and travel long distances. They could appear at an instant, take what they wanted and ride off again, leaving behind chaos and panic as they destroyed villages in Asia and Europe.

Scholars believe China constructed the Great Wall of China to keep out the Mongol ancestors of the Huns. Driven west by China’s Han Dynasty, the nomadic hoard exacted terror on the people in their path. As the Huns pushed west of the Caspian Sea in Western Asia, their violent raids forced the Visigoths and other Germanic tribes to move inside the borders of the Roman Empire.

By 405, the Romans formed an alliance with the Huns by paying tribute, or payment for protection. The Romans also sent a young man named Aetius to live with the warriors as a gesture of their goodwill.

For three years, Aetius lived with the Huns and learned their ways. He became close to Uldin, a savage prince who later ruled the Huns. Aetius’ experience with the Huns later served him, when he became the most dominant general of the Western Roman Empire.

When Uldin died, his nephew Bleda briefly ruled the Huns. Bleda was killed, probably at the hand of his younger brother, Attila. A ruthless leader, Attila often impaled those who opposed him, driving their bodies onto sharp sticks and leaving them to a torturous death that could take days.

Attila transformed the Huns from savage nomads into a disciplined army. Instead of gathering livestock and roots to survive, the Huns amassed wealth by collecting tribute and plundering cities throughout Southeast Europe. In 435, as Attila began military campaigns to build a powerful empire, he found an unusual ally in a Roman princess.

Honoria was the older sister of Emperor Valentinian. When she became pregnant with the child of a servant, Valentinian ordered his sister to marry a Roman senator. To escape her fate, Honoria sent a messenger to Attila, offering herself as a bride if the Huns could rescue her.

When the Roman emperor refused Attila’s demand for his sister, the Huns began cutting a swath of destruction through the Roman Empire, leading to a great confrontation in 451.

The two armies met in the Battle of Châlons in present-day France. Aetius, the general who once lived with the Huns, led the Romans. After two days of brutal fighting, the better-trained Roman army outflanked the Huns. Aetius allowed his defeated enemy to retreat; the Roman general believed that if he destroyed the Huns, the Visigoths and other Germanic cultures would become an even greater threat to the Roman Empire.

Defeated but still defiant, Attila regrouped his forces and returned to Italy to claim Honoria. In 452, his army suddenly retreated after a meeting with the head of the Christian Church. Church stories say Pope Leo I, without an army or weapons, met Attila, a man he called the “scourge of God."

Their meeting was secret, so we don’t know why Attila suddenly withdrew his forces from Italy. Leo may have bribed the Huns, or the charismatic Pope may have simply convinced Attila to stop fighting. Italy had suffered from a poor harvest the previous year, so there was little food for Attila’s starving army. There is also evidence that many of Attila’s soldiers were suffering from the plague. For whatever reason, Attila left Italy to return to his home in present-day Hungary.

A year later, the Huns celebrated a great feast as Attila took a new bride, a teenaged girl named Ildico. Legends say that at the end of the festivities, Attila retreated to his tent in a drunken stupor. The next morning, the new bride was found quivering in their tent after finding that Attila had choked to death from a nosebleed during the night.

Attila’s death led to a civil war among his sons. The Huns, without Attila, were no longer a unified people. Many of the subject people stopped paying tribute, and the Huns slowly disappeared from history as they assimilated into other cultures. 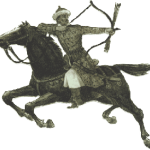 The Huns exacted terror over a wide swath of Europe and Asia because of their ability to attack quickly and without warning. The Huns knew little of farming or literacy, but they were expert horsemen. Hunnic warriors often lived in austere camps, but many outfitted their horses in saddles and stirrups decorated with gold and silver. Legends say boys were taught to ride as soon as they could walk.

Their most deadly weapon was the recurve bow. Unlike a traditional bow, the Huns created a weapon that curved away from the archer when unstrung. The Huns carefully fashioned their weapons from wood, bone, and glue made from the connective tissues of horses.

The recurve bow generated enormous power from a short pull. A traditional bow requires an archer to stand firmly, but Hunnic warriors were able to shoot from horseback. An expert archer could shoot an arrow more than 500 feet. Even in retreat, many warriors were so adept that they were able to turn around while riding to shoot—using only their legs to remain stable on the galloping horse. It is from this tactic that we get the term “parting shot.”